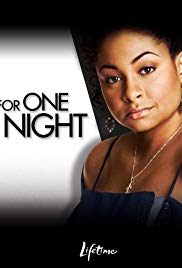 Storyline:
Their town always had two proms, one for the whites and one for the blacks. When both proms wanted the same DJ, Brianna McCallister suggested combining the proms, which would also mean more money for decorations. However, her idea shook the town up, especially after a white student was let off for the same offense that a black student was suspended for. Can the town overcome racial tensions and finally combine the two proms?
Written by
Anonymous
User Reviews: For One Night…It was a great movie. The movie hit on a very informative subject about the world in which we are currently living. It is still hard for me to believe that racism still is so prevalent in our day and age. The setting is very familiar to me since I grew up in New Orleans and had no idea of went on right in our own back yard. Glad to see something so sensitive exposed to our newer generations. The acting in the movie was great. The kids seem to be into their characters. Wardrobe was in excellent taste. I especially liked Raven’s best friend in the movie..Sela. She’s a doll with lots of fiestiness to her;) I’d like to see her more in TV movies or rather on the big screen.