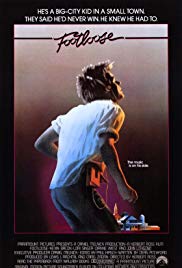 Storyline:
Classic tale of teenage rebellion and repression features a delightful combination of dance choreography and realistic and touching performances. When teenager Ren McCormack and his family move from big-city Chicago to a small Midwestern town, he’s in for a real case of culture shock. Though he tries hard to fit in, the streetwise Ren can’t quite believe he’s living in a place where rock music and dancing are illegal. However, there is one small pleasure: Ariel Moore, a troubled but lovely blonde with a jealous boyfriend. And a Bible-thumping minister, who is responsible for keeping the town dance-free. Ren and his classmates want to do away with this ordinance, especially since the senior prom is around the corner, but only Ren has the courage to initiate a battle to abolish the outmoded ban and revitalize the spirit of the repressed townspeople. Fast-paced drama is filled with such now-famous hit songs as the title track and “Let’s Hear It for the Boy”.
Written by
Anonymous
User Reviews: OK, maybe I’m giving in to nostalgia here but I rented "Footloose" recently and thought it was great. Yes, it’s definitely a teen flick, similar to "Dirty Dancing", and aging a little now.

But the music is great and the plot and themes do as much for me as "Grease" ever did. As teen movies go, it is somewhat original and interesting.

Who should see this film:

— Teens with nothing better to do on a rainy day

— People reliving the 1980s, you won’t be disappointed to

see this one again

I’ll give Footloose a 9 out of 10 because it cheered me up on a day I needed it.