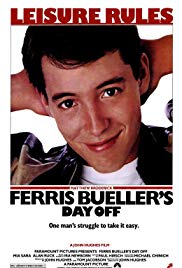 Storyline:
High school student Ferris Bueller wants a day off from school and he’s developed an incredibly sophisticated plan to pull it off. He talks his friend Cameron into taking his father’s prized Ferrari and with his girlfriend Sloane head into Chicago for the day. While they are taking in what the city has to offer school principal Ed Rooney is convinced that Ferris is, not for the first time, playing hooky for the day and is hell bent to catch him out. Ferris has anticipated that, much to Rooney’s chagrin.
Written by
garykmcd
User Reviews: Ferris Bueller was either loved or hated by his peers for always getting away with anything he’d do. Some would want him expelled, others want him for Class President. On this extremely eventful day, the audience is invited to follow Ferris, his best pal and his girlfriend from morning to afternoon (when they all should have been in school), enjoying a holiday declared by the resourceful Ferris Bueller.

They get to speed on the freeway in a Ferrari, sing "Danke Schoen" on an Octoberfest Float, eat at the most exclusive restaurant in town and always keep just one step ahead of a furious principal in hot pursuit. With fake computer grade and attendance records, Ferris has it made.

The scene where the principal hitches a ride on a school bus after having been "torn up" by Doberman watch dogs is worth the ticket price (Oh Yeah!). This is one of the funniest "high school prankster movies" ever! Has it been 20 years already? This is a definite Cult Classic! Right up there with Animal House and Caddy Shack.