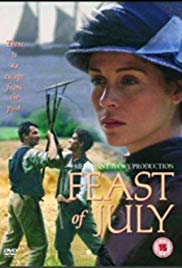 Storyline:
This romantic story, based on a novel by H.E. Bates and set in late 19th century England, rests on sibling rivalry for the affections of a woman who comes to live with their family by happenstance. In time, she decides to accept the marriage proposal of the youngest of the three sons, to the surprise of all. However, a man whom she had once loved and who had abandoned her (after making false promises) comes back into her life. The appearance of this scoundrel sets into motion a tragic series of events that eventually engulfs everyone.
Written by
infomond <[email protected]>
User Reviews: "Feast…" is a well crafted, somewhat staged and romanticized drama about a woman, Bella (Davidtz), who wanders into the lives of a 19th century agrarian English family with 3 adult sons changing their lives forever. The film offers good performances by all, represents rural life of the time well, is artfully presented, and avoids extreme excursions giving the film a sort of perfect Disney-esque feel. Davidtz graces the screen throughout though Chaplin offers perhaps the best performance. A good watch for those in need of some easy-going romantic period drama.