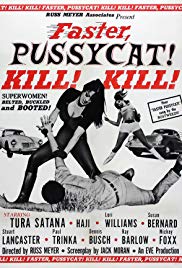 Storyline:
Three strippers seeking thrills encounter a young couple in the desert. After dispatching the boyfriend, they take the girl hostage and begin scheming on a crippled old man living with his two sons in the desert, reputedly hiding a tidy sum of cash. They become houseguests of the old man and try and seduce the sons in an attempt to locate the money, not realizing that the old man has a few sinister intentions of his own.
Written by
Ed Sutton <[email protected]>
User Reviews: I loved "Faster, Pussycat! Kill! Kill!" from the beginning, together with its three great main actresses Haji, Lori Williams, but especially the outstanding Tura Satana. The film tells the story of three exotic dancers, who become outlaws, drive fast cars, wear provoking clothes and cheat and beat up men. The only not typical thing about this movie is, that none of the chicks has a nude scene, what is really a pity! On the first view, Russ Meyer´s flick is nothing else but a funny piece of trash from the swinging 60s. But on the second it´s a portrait about the power of female sexuality on men. The sex characteristics differ from the usual stereotypes: the male are the victims, the women are the offenders, who apply their "weapons" unscrupulous to reach their aims. Also they are physically stronger and more cunning than the naive guys in this film. Especially Varla becomes a sexy, but immense violent murder machine and that makes her being one of the most frightening women in the history of cinema! But "Faster, Pussycat! Kill! Kill!" is more than that: it´s a piece of modern art, every lover of real cult movies or pop art should have seen it! (8/10)

Storyline:In L.A., Maurice and Dave sell steaks - high-end cuts of beef. They've hit a patch of no sales, and they're facing being fired. Maurice needs money to enroll in his final semester of acupuncture school, and ...