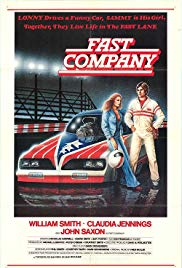 Storyline:
The famous drag racer Lonnie ‘Lucky Man’ Johnson is the star of the Fast Company, managed by the corrupt Phil Adamson Lonnie is the mentor of the promising funny car racer Billy ‘The Kid’ Brocker. When Adamson makes a deal with Lonnie’s competitor Gary ‘The Blacksmith’ Black, he takes the funny car from Lonnie and Billy. But they decide to steal the car and run independently in the next race. But Adamson intends to use any means to stop Loonie.
Written by
Claudio Carvalho, Rio de Janeiro, Brazil
User Reviews: Stuck between "Scanners" and "The Brood", "Fast Company" is quite a strange movie among David Cronenberg’s filmography. Apparently giving away his ambitious and usual themes, Cronenberg makes a pure entertainment, very close to Burt Reynolds’ universe ! So what happened? Cronenberg’s attachment to this film leads us to think it could be hiding something deeper. And in fact, one of the main Cronenbergian obsessions is the subject of the film : the car races are a metaphoric expression of "the re-building of the human body by technology". Is the movie any good ? Well, for a Cronenberg fan, it’s quite interesting. Others should watch a REAL Burt Reynold movie !