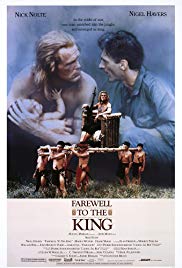 Storyline:
An American soldier who escapes the execution of his comrades by Japanese soldiers in Borneo during WWII becomes the leader of a personal empire among the headhunters in this war story told in the style of Joseph Conrad and Rudyard Kipling. The American is reluctant to rejoin the fight against the Japanese on the urging of a British commando team but conducts a war of vengeance when the Japanese attack his adopted people.
Written by
Keith Loh <[email protected]>
User Reviews: All the other posters make good points, but the one they miss is that this is first, last and simply, pure Milius. If you don’t know who John Milius is you probably do not read movie credits. John Milius is a screen writer and director. Kind of a cult figure. His stock in trade is manly virtue. His detractors would use the term "macho", but that is too derogatory. Movies you may have see by him are, "Wind and the Lion, Red Dawn, Conan the Barbarian, Jeremiah Johnson, Clear and Present Danger, The Rough Riders, Apocalypse Now, Magnum Force, Dirty Harry, Life and Times of Judge Roy Bean. See a pattern here?

Every one of the above movies deals with male relationships, honor, loyalty, fall and redemption. Romance relationships take a back seat to the relationships between the male characters, be they protagonists or antagonists. Jeramiah Johnson is a great example of this and shares many theme similarities with Farewell to the King.

Milius the director’s sense of honor transcends the norm and underscores his reputation as a Hollywood rebel and outcast. Leroyd is betrayed by his erstwhile allies symbolized by Gen. MacArthur who gives his word and violates that promise. Leroyd ultimately accepts his former hated Japanese enemy simply because he too possesses a personal code of honor similar to Leroyd. A similar scene plays out at the end of Red Dawn, where the Cuban Commander lets the dying Jed escape, carrying his dead brother (Charlie Sheen through a shared warriors sense of honor. Jed then goes to a playground to sit in a swing, presumably regaining their lost childhood in joined death. This is a familiar theme in Milius’ work.

Another familiar theme is that of the Rebel or loose cannon. Dirty Harry, the Marine Captain in Wind and the Lion, are just a few examples. Milius is the quintessential loose cannon in Hollywood. So he probably feels a kinship to the characters of which he writes.

There are many other themes that are familiar to all his movies. The female as a catalyst and semi-tragic figure is another. His women move his protagonists to greater heights. The female at risk or her unfortunate demise drives the central character to either his doom or his redemption, or both.

I have to say that I am a Milius fan. This movie is one of my favorites by him. Yes, I cringe at some of the acting, like Sgt. Tenga’s horrible fake British accent (Kenyan by way of Chicago, perhaps?) The English speaking "Apaches" also make me roll my eyes. But scenes like "Advance the Colors", or Leroyd’s redemption at the end of the movie, more than make up for the other lapses. This movie is good stuff. Get a six pack, or a bottle of scotch, a few cigars, some munchies and enter the world of John Milius. A world where men live by their honor, disputes are resolved man to man, and if enemies survive the ordeal, the sit down and drink to one another as survivors.