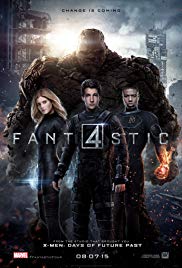 Storyline:
FANTASTIC FOUR, a contemporary re-imagining of Marvel’s original and longest-running superhero team, centers on four young outsiders who teleport to an alternate and dangerous universe, which alters their physical form in shocking ways. Their lives irrevocably upended, the team must learn to harness their daunting new abilities and work together to save Earth from a former friend turned enemy.
Written by
ahmetkozan
User Reviews: Just because you can do it doesn’t mean that you should and this wholly unnecessary and woefully terrible reboot of Marvel’s most famous superteam is proof of that axiom. Say what you may about Tim Story’s earlier cinematic adaptations, but as generic and middling as they were, they were at the very least entertaining. Unfortunately, the same cannot even be said of Josh Trank’s back-to- basics origin story, which plays like a humourless retread of his debut film ‘Chronicle’ but on a bigger budget and lest there be any doubt, it is far, far from fantastic.

Not that it doesn’t demonstrate such promise; the first act which establishes the friendship between the visionary Reed Richards (Miles Teller) and his tough-guy longtime best pal Ben Grimm (Jamie Bell) as well as the team dynamics between Reed and the other members of his research team the equally brilliant Sue (Kate Mara), her hot- headed younger brother Johnny (Michael B. Jordan), and malcontent genius Victor Von Doom (Toby Kibbell) capably lay the foundation for what could have been a character-driven drama based on their clashing personalities. Indeed, after the boys sans Sue decide on a whim following a night of intoxication to put their teleporting machine to the test, how they respond to their newfound super-powers individually and as a team should be an organic evolution from how they were before.

Alas, Trank, who co-wrote the screenplay with ‘X-Men’ veteran Simon Kinberg and Jeremy Slater, doesn’t quite know where to go from there. Rather than setting them on a course that would follow the perennial ‘X-Men’ theme of inclusiveness versus insularity against the rest of society, our teenage super-heroes are pretty much seen only in an isolated military facility where they are trained and from which they are deployed on covert operations overseas. While Johnny relishes the opportunity to be different, powerful and useful for once in his life, Sue and Ben are not quite so sanguine and participate insofar as there remains a possibility that the Government’s research on them would yield some way of reversing their abnormalities. In the meantime, Reed has vanished off the grid, while Victor is presumed dead on the planet they had landed up on in the other dimension.

One senses a conscious decision on the part of Trank to eschew the usual superheroics seen in the recent profusion of Marvel and to a lesser extent DC comic book adaptations, but the middle act drags precisely because Trank never quite finds a compelling substitute. Johnny’s potential conflict with Sue and Ben over the Government’s exploitation of their super-powers never amounts to anything more than a playground squabble. The estrangement between Johnny and his father (Reg E. Cathey), whose Baxter Institute had overseen the ill- fated project, is under-cooked. And last but not least, Reed’s guilt over his teammates’ fates as well as his strained friendship with Ben seem to vanish as quickly as he is apprehended and brought back to the facility to aid them in version 2.0 of the same project.

Trank’s intention of emphasising the tension within the quartet is evident and admirable, but is ultimately undone by a script that doesn’t develop it in any substantive manner. Worse still, it leaves an audience looking for visual spectacle severely wanting, that not even a very busy third act manages to salvage. Doom makes an unsurprising return here as their common enemy, driven by a fusion of body and alien matter to cause global destruction and around whose defeat to ensure the survival of planet Earth becomes a rallying call for the team to unite despite their differences. It is one of the dullest and most unexciting finales we’ve seen in a Marvel movie, not least for the fact that it doesn’t know how to collectively bring together their superpowers except in a tag-team fashion to distract their opponent.

It is also on the whole one of the ugliest comic book movies we’ve ever seen. The planet from which the quartet gain their powers is a barren rocky wasteland that has no character or distinction whatsoever, shrouded perpetually with thick grey clouds and given the even more nondescript name of ‘Zero’. The energy that gives them their abilities appears as some slimy green goo that belongs entirely in a C-grade Syfy TV movie, while their powers whether Reed’s rubber limbs or Sue’s telekinesis or Johnny’s pyrotechnics or Ben’s rock-covered body look equally cheesy. It is no wonder too that the eventual showdown, which takes place almost entirely on the planet surface of ‘Zero’, doesn’t play out any much better against such a bland setting, coming off even worse than any of the action scenes in its predecessors.

And certainly, this reboot is in no way better than Tim Story’s earlier adaptations, no matter of its ambition of being a darker and more character-driven superhero piece. ‘Chronicle’ may have been a perfect calling card for Trank, but ‘Fantastic Four’ shows a young, inexperienced director completely out of his depth, absolutely justifying the advance bad buzz it had spent months battling. It is utterly embarrassing that a film about Marvel’s most enduring creations is no better than a live-action ‘Power Rangers’ movie, but that’s exactly the ignominy that this misconceived and badly executed excuse of a superhero movie has wrought.

As is typical with such origin stories, this one ends with the quartet ‘stumbling’ on their title as they admire their new home in Central City and reflecting on how far they have come. Ben aka the Thing describes their journey as "fantastic"; we’re not entirely sure anyone of their audience shares the same sentiment.