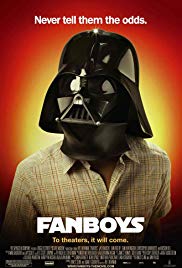 Storyline:
Star Wars fanatics take a cross-country trip to George Lucas’ Skywalker Ranch so their dying friend can see a screening of Star Wars: Episode I – The Phantom Menace (1999) before its release.
User Reviews: There are is lot of mixed review floating around this movie, a much of which is calling for a lower rating than what is now around a 7. Most all of them agree though, that this movie provides some laughs, has decent acting, and is decently done. From what I can tell, all those factors add up to an above average movie, which should earn it a seven. Now, it is no masterpiece, and it may not be groundbreaking in any way, but it is an all around solid film. Really, what could have been done to this movie to make it much better? A few things here and there could have been changed, but nothing major. The movie is called Fanboys, about a group of overly zealous Star Wars fans, everyone harshing on the dialogue should realize that a movie about Fanboys would do well to use a script emulating Fanboy lingo and cheesy jokes. Some people say that this movie survives on the cameos. If that is the case, then they must be some good cameos, and maybe that’s all they are, just well used cameos, and not a crutch for the movie like some people claim. Give Fanboys a shot and make your own opinions, plus, this movie didn’t hit theatres, so don’t compare it to films that are out of it’s league. Even though I find this much better than some of the garbage gracing the silver screen today.