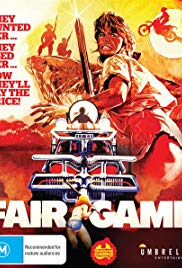 Storyline:
A young woman running a wildlife sanctuary in the Australian outback is in for trouble when she is confronted by three kangaroo hunters. Bored with killing kangaroos, they decide to kill the animals in the sanctuary, and when they see how attractive the owner is, they decide to have a little “fun” with her, too. Turns out that they may get a bit more “fun” than they bargained for.
Written by
[email protected]
User Reviews: I had two movies called "Fair Game" standing on my must-see list, so I watched them after each other in order not to lose track of one of them. The first one was an obscure Italian lethal-snake-on-the-loose thriller also known as "Mamba" and this one is Australia’s belated (unless I missed something) response to the ‘Revengeploitation" sub genre. Revenge thrillers were especially popular throughout the entire decade of the 70’s, with highlights like "Last House on the Left", "I Spit on your Grave, "Fight for your Life", "House by the Lake" and "House on the Edge of the Park". These movies routinely handle about innocent women (preferably defenseless and fragile) getting harassed and viciously raped by a group of men (preferably perverted hicks and/or fugitive criminals) and then avenging themselves by taking justice into their own hands. The gritty atmosphere and gratuitous use of violence and sleaze in "Fair Game" is pretty much prototypic revenge thriller stuff, but it nevertheless also remains an authentic Aussie movie, meaning the assaulters are bored kangaroo poachers looking for new thrills and the ‘victim’ (Cassandra Delaney; the former Mrs. John Denver) is actually a very potent lady who fights back from the beginning and never really allows her opponents to get the upper hand. Jessica runs a wildlife reservation in the middle of the outback, so naturally there’s a vicious conflict when she bumps into a trio of insensitive and macho poachers doing some illegal kangaroo hunting on her territories. This film feels refreshing and innovative because the script doesn’t unfold like the majority of 70’s revenge thrillers. The interactions between Jessica and the poachers start off like a testosterone-laden showdown, but then gradually escalate into a merciless battle with humiliation, rape and murder. There are several highly memorable and deliciously exploitative scenes in "Fair Game", most notably the one with Delaney  in her white undies – tied to the hood of a jeep whilst it races through the desert. Her acts of vengeance during the climax are quite impressive as well and I guarantee there’s some impressive bloodshed to enjoy in "Fair Game". As often the case with Australian cult-productions ("Outback", "Wolf Creek", "Mad Max"), the exterior filming location and wildlife images alone make the movie worth purchasing and this particular one also benefices from good music and stylish camera-work. The acting performances are more than satisfying and I’m pleased to notice the cast exclusively exists of native Australians. This isn’t always the case, you know. Definitely recommended if you’re a fan of the revenge movies.

Storyline:In Sunray, a backwater town on Australia's Murray River, there's little to do but fish or listen to the local radio station. D.J. Ken Sherry arrives from the hustle of Brisbane to run the station; he's mid-4...

Storyline:Revisionist western about fallen preacher Shay, who guns down his wife Raysha for running off with another man. Wandering, he meets single mom Laurie. However, helpless sheriff Scoby wants Shay to help him f...

Storyline:A mother's grief over the death of her toddler leads to horror.User Reviews: I enjoyed this movie, but I found it drew inspiration from the Original Rosemary's baby, starring Mia Farrow. Not as good, but sti...