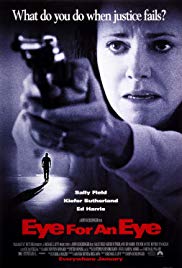 Storyline:
Karen McCann’s eldest daughter is raped and murdered whilst on the phone with her. When the case against Robert Doob, the perpetrator, is dismissed because of a technicality, she starts following him and sees how he checks out his next victim, a woman he delivers groceries to. She tells the police, but is only warned she must stop following Doob. When she tries to warn the woman, she is shooed out of the house. Doob, having found out that Karen is following him, threatens to do something to her youngest daughter. She then seeks help from a group of vigilantes connected to a support group, in order to shoot Doob. However, a friend from the support group turns out to be an FBI agent investigating the very vigilante activity Karen is involved in and warns her that she will go to jail for the rest of her life unless it is self-defense. In the meantime, tension grows between Karen and her husband Mack, because he finds out she has secretly been taking self-defense classes and has been …
Written by
gerd86
User Reviews: This movie has been reviewed into overkill by many others on this board, so I will spare you another home-viewer’s two thumbs down. However I would like to state that I am EXTREMELY surprised that no one has commented about the actual rape scene itself. I can remember watching this as a kid on Lifetime, and years later still remembering that scene to a chilling degree. In most cases for rape scenes, (at least the ones aired on television) they only get from the waist up in the shot. In this particular scene, the camera is aimed straight ahead at the rapist in a sitting position on the floor with the young girl laying out in front of him. Although there is no nudity involved, the scene is VERY graphic in nature. I don’t know how in the world they got that girl to play out the scene so well, but I could actually feel her pain, as depicted in her face and screaming from being ripped apart. It was enough make me sick my stomach then as a child, and now as an adult.