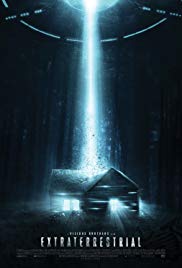 Storyline:
A group of friends on a weekend trip to a cabin in the woods find themselves terrorized by alien visitors.
User Reviews: The problem with this film, like so many other straight to digital release movies, is the budget. Reading the synopsis, one couldn’t possibly expect to see a groundbreaking film. I mean, it’s the hundred millionth alien film released in the past couple decades. Yet the writers, for some reason, thought they were up to the challenge. It is apparent that the filmmakers were relying on their ability to take a genre that has been done to death and make it their own, utilizing vivid, amped up action sequences to showcase their aliens. The problem is that there was obviously no money for that. In the age of the billion dollar Hollywood blockbuster, any sci-fi film that relies solely on visuals and action sequences must have the necessary dollars to make it look good. There were so many moments that were desperately trying to send a chill down the spine of the viewer, but fell short solely because of it’s inability to look like more than a SyFy network movie.

But something tells me these guys, like most Hollywood filmmakers, simply did not care. The goal is always the same. Get the money, get it done, get it out. Forget the rest. If you’re looking to continue the cycle of junk film, made with speedy preparation, while lacking any and all quality, then perhaps this movie is for you. Bon Appetit.