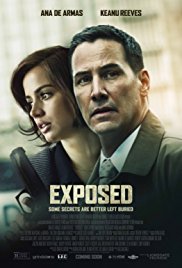 Storyline:
Detective Galban Keanu Reeves, finds his partner and close friend, Detective Cullen, murdered in an underground subway. On the hunt for the killer/s, Galban begins to suspect his partner may have been heavily involved in drug dealing and police corruption. As Galban investigates, people who knew Cullen, are conveniently found dead. The closer Galban gets to the truth, both Cullen’s wife, Janine Mira Sorvino, and his Lieutenant Christopher McDonald, try to persuade him to back off, fearing his findings may discredit Cullen and expose corruption within the Police Department. Galban’s only remaining lead is Isabel, a young, devout, Latina girl, who resides with her in-laws. Galban fears her life could be in jeopardy should he get too close to her. However, Isabel has recently experienced something not from this world, something mystical that she believes is truly a miracle. Not unlike Galban, Isabel is dealing with her own demons from the past; a past that just may lead them to the truth…
Written by
a-movie-fan
User Reviews: A woman leaves a nightclub and, over the objections of her brother-in-law, insists on taking the subway home alone. On the train platform she witnesses an incredible event: an overly well-dressed man with a decidedly albino cast to his features walks on air and levitates above the subway track, peering down the tunnel to see if the train is arriving. He turns, walks back to the platform, and smiles at the woman.

The next day, a crooked police officer is found dead in the same subway station, and one by one, all the associates of the woman disappear or are murdered. She herself begins to witness surreal visions which increase in frequency when she befriends a small girl she suspects to be a victim of sexual abuse.

This movie had the makings of an intriguing plot, as the story expands and we learn more about the various characters and how they are, or may be, related. Unfortunately, the makings of a plot do not equal a plot itself, and this is never more so the case than when the studio edits the film to try to create suspense and mystery that should have been inherent in the original screenplay. The endless flashbacks, vision sequences, and out-of-chronology scenes add nothing to the film but confusion and, oddly enough, tedium. They take a better-than-average premise and turn it into a mess of a movie, saved primarily by the few nuggets of genuine creativity in the plot and the looks and acting of Ana de Armas and the cast who portray her family members.

I gave this film 6 stars, solely because I felt the current consensus of 4.2 is absurdly low. A realistic rating would be in the 5.2 to 5.5 range, in my opinion. As the film is only 90 minutes, you won’t waste much time watching it if you happen to disagree.