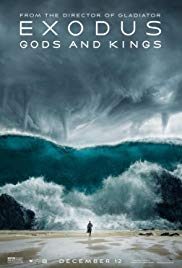 Storyline:
Biblical epic Exodus: Gods and Kings stars Christian Bale as Moses who, as the film opens, fights alongside his brother Ramses (a shaved-headed Joel Edgerton), to help defend Egypt, which is ruled by their father, Seti (John Turturro). During battle, Moses saves Ramses life, causing Ramses to fear that his brother will one day be King because it fits with a prophecy handed down by one of Seti’s trusted spiritualists. Soon after Seti’s death, Moses, who is actually Jewish and not Egyptian, is banished. However, he becomes the leader of the Jewish people and leads a rebellion, with the help of a wrathful God, against that Egyptians..
User Reviews: Let me say immediately. Visually, technically, this film is a wonder and for that alone it deserves to be seen but then. Oh brother. Christian Bale, one of my favorites among the post-De Niro crop, is cast as Moses, you know? Moses – the man chosen by God for his humbleness. Christian’s Moses blazes with self confidence. The Godly horrors known as plagues are a cinematic jaw dropping experience but when it returns to the actual drama. Oh brother. How can it possibly be? When the great Ridley Scott made his Robin Hood (did you see it?)his star Russell Crowe went to a talk show to promote the movie and called the Erroll Flynn version, "crap" – You see? I think that’s at the center of the problem.

Storyline:Louis Theroux returns to visit the Westboro Baptist Church in the wake of the death of its leader.User Reviews: A part of me was left wondering what the point in this third documentary was because it was som...