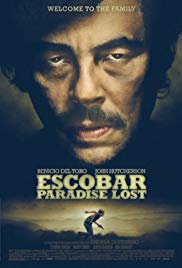 Storyline:
Nicko and his brother take off from Canada in search of an easier life on the beaches of Colombia. Nicko meets a girl in the local village and they quickly fall in love, only for Nicko to later find out that Maria’s uncle is the drug trafficker, Pablo Escobar. His life takes a dramatic turn after meeting El Patron, and Nick is forced into impossible situations to try and keep his family safe, but does Pablo have other ideas?
Written by
Steve Watson
User Reviews: Josh Hutcherson plays a surfer living in Colombia, who falls in love with a girl whose uncle is a politician attracted to drug trafficking, played by Benicio del Toro.

It’s a dark tale about getting caught up with the wrong crowd and not being able to get out. The moral of the story is there but I really got nothing out of it.

A period piece set in the 80s, the movie does feel a little chopped together. A lot of Background story seems to go by so fast that I barely notice it from all the one-liners used to tell it.

But the hunger games star showed he could front a movie. He was charming and capable of a lot of dramatic tension. Good for him that he does have a seasoned award winning actor like Del Toro supporting him in this movie, but for the most part the whole thing falls on Josh’s performance and he came through for me by getting me all up in his situation.

Depending on weather you like or dislike Hutcherson, or like me, don’t have any feeling for him at all either way, will sway your opinion on the movie. The story is weak and the film making is very centered on the leading man’s ability to make you like him.

Storyline:Jean is a young cab driver. Anna, a flower-girl neighbour, is in love with him. But he is still thinking to Pola, who just left him. Jean asks her to the bal. Many events (Pola's come back, two villains...) ...

Storyline:A news-reel like movie about early part of the French Revolution, shown from the eyes of individual people, citizens of Marseille, counts in German exile and, of course the king Louis XVI, showing their own ...

Storyline:Traces the pilgrimage of John Anderson, an average guy with a passion for jazz, from his home in outback Western Australia to the jazz clubs of Paris, to meet his idol, jazz trumpeter Billy Cross. ...

Storyline:This drama depicts the misery of neglected children in big cities. 13 years old Bruno is of a good family, but since the death of his grandmother he spends most of his time alone, in a phantasy world, while ...

Storyline:Has Jean-Jacques an infallible way to seduce women or is he just fantasizing about it? His girlfriend Ariane wants to sort it out.User Reviews: Emmanuel Mouret writes, directs and stars in yet another romant...

Storyline:In this sprawling, star-laden film, we see the struggles of various French resistance factions to regain control of Paris near the end of World War II. The Nazi general in charge of Paris, Dietrich von Choli...