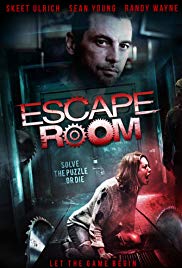 Storyline:
four friends who partake in a popular Los Angeles escape room, owned by Brice (Ulrich), and find themselves stuck with a demonically possessed killer. Sean Young plays the keeper of a box containing an evil demon. The friends have less than an hour to solve the puzzles needed to escape the room alive
Written by
simeon anderson
User Reviews: Well I thought it was a clone of Saw and I like Saw so I gave it a shot.

Turns out it’s not a clone at all, it’s an original movie. Can you believe it ? A horror film with an original scenario ? Not your typical house-in-the-woods horror film, for sure. Thumbs up for that.

This movie is not exceptional. But it was so happy to finally find a horror movie which actually offers something new.

Acting is average, but a special effort has been made to the sound effects. The snitch sounds like he is 200 pounds, and that makes him really scary. I’ve seen a lot of horror movies, and I’m not scared easily, but this one has definitely a nice tension.

TLDR ; not Oscar-winning, but finally something new. I recommend.