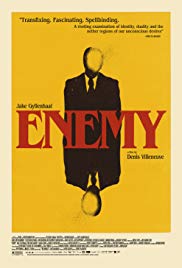 Storyline:
Adam Bell is a Toronto area History college professor. He is a rather somber man, largely because he is stuck in a routine, which includes a relationship with his live-in girlfriend, Mary. While watching a rental movie, he spots an actor in a bit part that looks like him. He becomes obsessed with finding out about this double of his. He learns that the actor’s stage name is Daniel Saint Claire, whose legal name is Anthony Claire. Claire is a Toronto based actor with only a few on-screen credits, and is married to a woman named Helen who is currently several months pregnant. Adam then becomes obsessed with meeting Claire, who he learns upon first sighting that they look exactly the same, from the facial hair to a scar each has, but Claire who outwardly is more “put together” than Adam. Their lives become intertwined as Claire himself ends up becoming obsessed with Adam, but in a slightly different way.
Written by
Huggo
User Reviews: Enemy is the latest thriller from Canadian director Denis Villeneuve, and it stands as a hybrid mix of David Lynch and David Fincher at their very finest. Enemy follows Adam (Jake Gyllenhaal) on a journey to find his exact lookalike named Anthony, a terrible D-list celebrity. As his investigation deepens, the mystery thickens and he is thrown into a fray way above his head. What works in Enemy is Gyllenhaal’s fearless performance as a man who is searching to find who he really is. There are a couple scenes that he has where is truly riveting and it becomes so hard to take your eyes off the screen. It really is an explosive yet very contained performance that I feel needs a lot of recognition. Enemy marks itself as a film about identity and never knowing who you truly are and the pressures of wanting to become something you’re not. While it remains as a heavy message, it still makes for a film that almost demands repeat viewings. At 90 minutes even, the film moves and never slows down enough for us to even breathe. Before we can even question what is going on in one scene, Villeneuve throws us another curve ball to contend with. While that may bring confusion to many people, it is very welcoming to a viewer in the mood to do some serious thinking. Anything beyond that, it may garner some negative responses especially if you’re not paying close attention. Enemy works well as a psychological thriller, bringing some of the most disturbing images I’ve seen on screen in recent years. This film is NOT scary, but it is extremely uneasy and very creepy, especially towards the last twenty minutes of the film, which had me holding my breath as we finally discover the truth of what is going on.

Overall, this is one hell of a film that really does almost require a second (and possibly a third) viewing. I highly recommend it, especially to fans of David Lynch’s Eraserhead. The images are memorable, the performances are very well rounded and this is just a very very well done film.

Storyline:A documentary thriller describing the last days of the Israeli community in Tehran, on the eve of the Islamic Revolution in 1979. The director, whose family was in Tehran at the time, uses rare archive mater...

Storyline:Wild Hearts tells the story of Willow (Cambrie Schroder), a strong, beautiful, independent minded young girl from Malibu who is determined to find the father she has never known. She finds Jack (Ricky Schrod...

Storyline:RiverBlue discovers the toxic side effects of textile production and jean manufacturing on some of the world's largest rivers. Traveling from tanneries along rivers in India, to some of the largest jean manu...

Storyline:Patagonia presents Jumbo Wild -a gripping, hour-long documentary film by Sweetgrass Productions that tells the true story of the decades-long battle over the future of British Columbia's iconic Jumbo Valley ...

Storyline:In the deep south of the 1970's, a career criminal is lured into taking a job that might be his undoing.User Reviews:

Storyline:When a young ex-con joins a prayer group to receive guidance - and the group members discover they have more in common than they thought - their lives are changed forever.User Reviews: