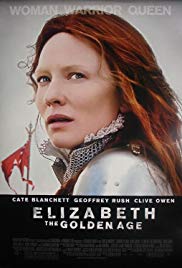 Storyline:
Two faiths, two empires, two rulers – colliding in 1588. Papist Spain wants to bring down the heretic Elizabeth. Philip is building an armada but needs a rationale to attack. With covert intrigue, Spain sets a trap for the Queen and her principal secretary, Walsingham, using as a pawn Elizabeth’s cousin Mary Stuart, who’s under house arrest in the North. The trap springs, and the armada sets sail, to rendezvous with French ground forces and to attack. During these months, the Virgin Queen falls in love with Walter Raleigh, keeping him close to court and away from the sea and America. Is treachery or heroism at his heart? Does loneliness await her passionate majesty?
Written by
<[email protected]>
User Reviews: I hadn’t heard too much about this film, but had seen the posters for it, so I gave it a shot. And after leaving the theatre I really wasn’t sure what to say about it.

There’s a lot of good stuff in this film, but there’re some pitfalls as well. On the plus side the sets and costumes are magnificent. A great deal of care and love when into the art direction to bring us an Elizabethan renaissance film, replete with court intrigue and foreign emissaries who threaten invasion because of high seas thievery courtesy Clive Owen’s character. Visually this film is very lush and impressive, though somewhat confining at times. We’re never really shown Elizabethan England, just the "important parts" that are salient to the story.

And, as Elizabeth’s favorite playwright would say, "there’s the rub". And by this I mean that the film is a bit all over the place. It’s a costume drama, it’s a romance, it’s a period political thriller, it’s a military epic, and so forth. It even skids the fantasy genre with some of the fancy camera work that was done. But, all in all, the film’s primary thrust is to try and grab hold of all of these genres, and tie them together into some kind of cohesive and suscint manner.

The romance, the intrigue, the sisterly emotions, the rivalry between matriarchs, and the "battle scene" hearken back to a time when Hollywood used to crank out these kinds of movies with some regularity. But the context between those films and "Elizabeth: The Golden Age" are nearly day and night, even though both are striving for a high water mark in historical drama.

I thought "Elizabeth: The Golden Age" was technically a competent production. In fact, given the difficulties there must have been getting some of the shots I’ll give it high marks as a pure production effort. But as a film I simply found it to be a touch too ambitious, and over-indulgent near the end.

That’s not to say that I didn’t enjoy a lot of the film, because I did. Blanchet’s Elizabeth is a strong woman; full of zest, energy, and a bit of anger, which she levels at her adversaries. But she’s also a chief of state, internationalist, and, of course, the queen of England. She doesn’t wear several hats. She wears a crown. But even so, and this is where the film falls a bit short, she doesn’t demonstrate a cohesive ability to command all. She shows she’s in charge, but doesn’t act like she’s in charge until near the end.

The film was geared and aimed at a female audience (a thing which I had not expected), and so a lot of the energy is directed at that audience, with the appropriate emotional flourishes. Combined with some so-so CGI for the action sequences (and a horse with a perm which almost had me laughing), one wonders where the film was headed. Elizabeth didn’t save England with her emotional power alone, and yet this is the gist of the film. It’s a real let down in this regard.

The film is a mixed blessing. There’s a lot of decent acting, and some exceptional performances by the leads. Married to a rather extravagant art director to bring to life palace, throne room, chambers, and galleons at sea, and one can easily see that this was meant to be a top notch production. But some of the logical loopholes where Blanchet’s character is concerned conspire with some of the story loopholes to hold back a better film.

As a guy all I can say is that it’s not something I’d watch again, and I’m not too sure I’d recommend it to any female audiences. But, if you don’t mind your period dramas skirting the edge of high kamp, then splurge on a ticket, and see what "Elizabeth: The Golden Age" is all about.

Storyline:Off the southern coast of the Korean Peninsula, an island of 17 inhabitants exists. The so-called Paradise Island holds up to its name with its breath-taking mountains and sea coupled with good-natured peopl...

Storyline:It's Christmas and Zip and Zap are up to their old tricks. But this time they've gone too far and their punishment will be no Christmas vacation and a seemingly boring boat trip with their parents instead. T...