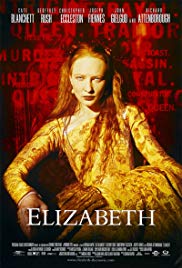 Storyline:
This film details the ascension to the throne and the early reign of Queen Elizabeth the First, as played by Cate Blanchett. The main focus is the endless attempts by her council to marry her off, the Catholic hatred of her and her romance with Lord Robert Dudley.
Written by
CharmedGirl47
User Reviews: The acting is superb as is the choreography. A very da Vinci-like use of like and dark in comparing the young and innocent Elizabeth with the corrupt and conspiracy ridden "royal court". Very compelling and interesting as the new queen, who is thrust, almost against her wish, into power, learns the nature of the beast she must tame and then rule. It may not be a blockbuster of an event, but you just don’t find this level of acting in Hollywood. Yet, taken as a whole, the story reminded me of the Godfather, yet it takes place some 450 years in the past.

Storyline:Tony is admitted to a rehabilitation center after a serious ski accident. Dependent on the medical staff and pain relievers, she takes time to look back on a turbulent relationship that she experienced with ...