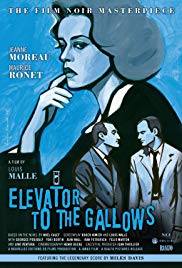 Storyline:
Florence Carala and her lover Julien Tavernier, an ex – paratrooper want to murder her husband by faking a suicide. But after Julien has killed him and he puts his things in his car, he finds he has forgotten the rope outside the window and he returns to the building to remove it…
Written by
Stephan Eichenberg <[email protected]>
User Reviews: Louis Malle was all of 25 when he made his directorial debut with this 1958 noirish thriller that also serves as a morality play. Using the elevator of the title as a vehicle for his leitmotif, he does an admirable job of capturing the smoky gray atmosphere of Paris in the 1950’s and using it to great cinematic effect on a chain-link story of deception and murder. In fact, the whole movie plays like a Francophile version of a James M. Cain novel times two with plot twists coming in quick and sometimes contrived succession. To its credit, the brief 92-minute running time trots by quickly given the multiple story lines.

The labyrinth story focuses first on illicit lovers Florence Carala, the restless wife of a corrupt arms dealer, and Julien Tavernier, a former war hero working for Florence’s husband. There is not a wasted moment as they plot her husband’s murder, but of course, things go awry with a forgotten piece of evidence and a running car ready to be taken. An amoral young couple, sullen and resentful Louis and free-spirited Veronique, enter the scene tangentially and get caught up in their own deceptions with a boisterous German couple whom they meet through a fender bender. The plot strands meander somewhat and eventually come together in a climax that has all the characters confronting the harsh reality of their past actions. There is a particular poignancy in the photos Florence sees at the end since we have no indication of the depth of emotion between the lovers otherwise.

Malle, along with co-screenwriter Roger Nimier, presents an interesting puzzle full of irony and chance events, but there is a periodic slackness to the suspense, for instance, Florence’s endlessly despondent walk though nocturnal Paris. Jazz great Miles Davis contributes a fitting hipster score, though the music is not as big an element as I expected in setting the mood. With her sorrowful eyes and pouting intelligence, Jeanne Moreau makes a vivid impression as Florence and gives her obsessed character the necessary gravitas to make her journey worthy of our interest. Maurice Ronet effectively plays Julien like a coiled spring throughout, and it’s intriguing to note how most of his performance takes place in an immobilized elevator. As Louis and Veronique, Georges Poujuloy and the especially pixyish Yori Bertin are the forerunners for the runaway pair in Jean-Luc Godard’s "Breathless" replete with youthful angst and mercenary cool.

The print transfer on the 2006 Criterion Collection DVD package is wonderfully pristine. The first disc also contains the original and 2005 re-release trailers, though there is surprisingly no scholarly audio commentary track (the usual bonus for a Criterion release). The second disc, however, makes up for it with a bevy of extras starting with an extensive 1975 early career retrospective interview with Malle, a 2005 interview with an aged but still haunting Moreau, and a joint interview with the two icons and one-time lovers at the 1993 Cannes Film Festival.

Three shorts on the second disc focus on Davis’s contribution – the six-minute "The Record Session" shot the night Davis and his musicians recorded the score; a remembrance piece with pianist Rene Utreger, the only surviving member of Davis’s ensemble; and the celebratory "Miles Goes Modal: The Breakthrough Score to Elevator to the Gallows" where jazz trumpeter Jon Faddis and music critic Gary Giddins discuss Davis’s influence over the generation of musicians to come. There is also a short by Malle set to Charlie Parker’s "Crazeology" and an informative 25-page photo essay booklet.