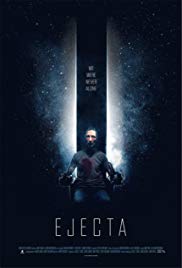 Storyline:
EJECTA is the story of two men who witness an unexplainable event in the atmosphere on the eve of a historic solar storm and must survive a terrifying life form that’s hunting them. An anonymous group will stop at nothing to unearth the truth behind what happened that night to the men and prove to the world that we were never alone in the universe.
Written by
Matt Wiele
User Reviews: Come on! If it doesn’t have a budget of hundreds of million of dollars it’s a bad movie? The IMDb rating is way too low for this film.

It is not perfect, that I admit, but it is far from bad. I think the worst part of it was the interrogation room. They used some weird tech and they made a great effort to explain that no one knows how it works, only what it does. It had absolutely nothing to do with the story. Also the psychopathic doctor cliché went a little bit too far and for no good reason.

It basically played out like an over extended Outer Limits episode sans the budget. Lots of annoying clichés were used like the evil shadowy government organization, the humanoid alien that makes cameras fizzle right when it enters the shot, the found footage bit, the black eyes, etc. However it stops right at the edge of being too much and overall it kind of works.

Bottom line: the ridiculous low budget shows in the special effects, the sets and, unfortunately, the acting quality. The story, though, is interesting enough to keep someone watching and always trying to understand what is going on. I wouldn’t recommend it, but I can’t tell people off, either. A bit too long for the content, though.

Supermen: A Story of British Wrestlers (2014)

Storyline:Supermen: A Story of British Wrestlers is a feature-length documentary film focused on what it's like to live a life in wrestling.User Reviews: