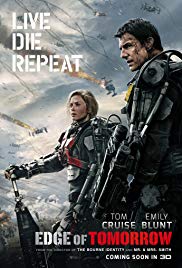 Storyline:
An alien race has hit the Earth in an unrelenting assault, unbeatable by any military unit in the world. Major William Cage (Cruise) is an officer who has never seen a day of combat when he is unceremoniously dropped into what amounts to a suicide mission. Killed within minutes, Cage now finds himself inexplicably thrown into a time loop-forcing him to live out the same brutal combat over and over, fighting and dying again…and again. But with each battle, Cage becomes able to engage the adversaries with increasing skill, alongside Special Forces warrior Rita Vrataski (Blunt). And, as Cage and Vrataski take the fight to the aliens, each repeated encounter gets them one step closer to defeating the enemy!
Written by
Warner Bros. Pictures
User Reviews: You could describe this movie as a dizzying combination of Groundhog Day, Starship Troopers, Source Code and The Butterfly Effect. Edge of Tomorrow borrows from these films and while some of the individual ideas may not therefore be groundbreakingly original, the way they’re combined and put to use in Edge of Tomorrow by director Doug Liman certainly is. As aliens have invaded Earth, humanity’s only hope lies in a cowardly PR officer Bill Cage (played by Tom Cruise) with no combat skills who is sent to the front lines. His only advantage? A save point, sort of. Are you excited yet? You should be. I don’t want to tell you more specifics about the plot because it’s best to experience and discover this great piece of work yourself.

You have to love Tom Cruise as an actor, he always gives his roles a 100 percent and he’s phenomenal in Edge of Tomorrow – Physical, funny and determined. I’d say this is his best performance since Collateral. Emily Blunt is fantastically badass as the poster girl of the war, Rita Vrataski. This is her first real action film and she knocks it out of the park. Cruise and Blunt also have great chemistry together. Bill Paxton and Brandon Gleeson give great supporting performances and most of the supporting soldiers have distinct personalities even with their limited screen times.

Edge of Tomorrow’s world building is slick and credible. The CGI and the special effects are seamless and bring the great set pieces and the relentless aliens to life. The action is really exhilarating (the cool exoskeleton suits definitely help here) and the script is very witty and inventive as it needs to be when you’re dealing with time travel (or time resets if you will). Despite its action thrills Edge of Tomorrow finds plenty of room for character development both for Cruise and Blunt. The script also manages to pull off some quite funny scenes (especially in the training segment). I also have to mention James Herbert’s snappy editing because it’s that good. The the situations could get old really fast if it wasn’t for the fast-paced editing that concisely and freshly shows the differences in each repetition Cruise goes through. The pacing is absolutely relentless and there isn’t a boring moment in the film.

The tone of the film is pretty much perfect for a summer blockbuster. It’s not overly morose or gloomy despite the backdrop of an alien invasion. Instead it opts for wit, fun and action thrills. I was really gripped from start to finish and I had this big grin on my face when I left the theater. I really liked the other recent blockbusters in Godzilla and X-Men: Days of Future Past but Edge of Tomorrow surpasses them both. If only every summer blockbuster was such good fun.