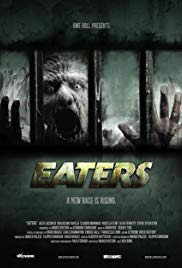 Everyone’s having a stab at the zombie/virus flick since 28 days Later – Spain with REC, Germany with Rammbock and France Le Horde to name a few.

Although Marmite director Uwe Boll has a producer credit, this shares little if anything with his films. Both writers/ Directors  Luca Boni and Marco Ristori deliver a competently constructed bleak atmospheric zombie horror that is stylishly shot and presented in washed out colour.

Eaters opens with the standard zombie exposition affair of news clips how virus infection has spread. Gyno spins that the zombie epidemic maybe the next step in evolution while the hardened soldiers believe otherwise.

There’s some good zombie make up design, lopped off heads, blood, fried zombies, undead torture, skulls and exploding heads. Guns, grenades and machetes are used to dispose and there are some interesting kill scenes as the two hardened soldiers, Igor a likable hard-man played excellently by Alex Lucchesi and Alen notably by Guglielmo Favilla go to section F on a ‘corpse hunt’. Notable is chained up Alexis (Rosella Elmi) who is a carrier of the virus. Young actress Elisa Ferretti as Cristina deserves a mention.

Although Igor is likened to Leon it’s doctor Gyno played by Claudio Marmugi who is the Jean Reno-alike. He experiments on the dead, shooting them after their used, chopping them up, feeding them scraps reminiscent of Day of the Dead. Interesting the zombies here eat their own body parts, encounters with a Cultist group, slow/fast zombies and armed zombies add to the pleasure.

This serious slick Italian production is grim with a sense of black humour and irony there’s characters reading ‘corpse and girls’ magazine. Crazy Caravaggio painter of dead people. The score is similar to resident evil with electronic heavy beat and it had a few flash backs and eerie dream sequences deliver some jump moments.

Sector b’s Nazi group aside the script delivers some tension as madness sets in as the character try to pass time, humour feels unforced and the acting for the most part realistic. Eaters may have it’s faults debatably some CGI, editing and pacing issues but for the most part it’s a fulfilling ride. Although it borrows from the likes of Resident Evil Apocalypse and 28 Weeks Later to name a few there’s enough twists and originality as the leads try to accept their situation to prevent it becoming stale reinforced with an ending that goes against the clichés in the last act.

Gory, bloody and overall more fun than it should be due to it’s great execution and grimness.

Storyline:Witness jaw-dropping fight sequences from Chocolate's kick-ass Jeeja Yanin, who also stars in the sequel to the martial arts hit, The Protector. In This Girl is Badass, Jeeja takes her skills to the next lev...

Storyline:The desert can be an unforgiving place. By day, the temperatures soar past the century mark, hot enough to drop a man in his tracks, and by night they plummet low enough to freeze the life out of him. It is ...

Storyline:A group of young Friends discover an ancient statue that unleashes an Evil Spirit who enslaves them to collect human blood so that the Evil Spirit can come back to life and rule the world. It's up to a Detec...