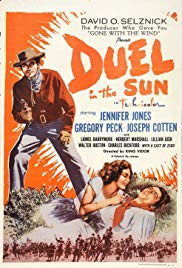 Storyline:
When her father is hanged for shooting his wife and her lover, half-breed Pearl Chavez goes to live with distant relatives in Texas. Welcomed by Laura Belle and her elder lawyer son Jesse, she meets with hostility from the ranch-owner himself, wheelchair-bound Senator Jackson McCanles, and with lustful interest from womanising, unruly younger son Lewt. Almost at once, already existing family tensions are exacerbated by her presence and the way she is physically drawn to Lewt.
Written by
Jeremy Perkins {J-26}
User Reviews: A half-breed named Pearl (Jennifer Jones) is sent off to live with her second cousins after her parents are killed. She disrupts the household causing problems between two brothers–one named Lewt (Gregory Peck) who’s bad and Jesse (Joseph Cotten) who’s good. She also is hated by the father (Lionel Barrymore) and protected by the mother (Lillian Gish).

Beautifully filmed in Technicolor this is a fun movie. The dialogue is full of howlers and, for it’s time, this was pretty strong stuff. The emphasis is on sex and that bothered audiences in the late 40s. An entire dance by Jones was cut out and the release of the film was delayed because of the content! Today it’s very tame and pretty funny.

Jones is horribly miscast as Pearl. She’s very beautiful and wears tight, revealing clothing all through the film, but her acting is terrible. She sneers and glares her way through all her scenes and seems incapable of saying any line believably. Peck is surprisingly very good playing an evil man. Cotten and Gish are stuck with thankless good person roles. Barrymore REALLY chews the scenery. And the opening narration is by Orson Welles!

This movie was made by David O. Selznick to showcase his then girlfriend (and future wife) Jones. Purportedly he made this with serious intentions. It was a big hit but most critics dismissed it as trash. Today it’s just a true camp classic. Hysterically bad but beautifully filmed and loads of fun. The climax especially is a howler. A great party flick.

In it’s own way, this is a definite must-see.