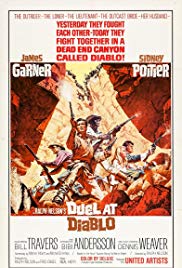 Storyline:
Lieutenant McAllister is ordered to transport several ammunition wagons to another fort through Apache territory with only a small troop of rookie soldiers to guard them. Along for the ride is ex-scout Jess Remsberg who is trying to track down Ellen Grange, who, having recently been freed from Apache captivity, has mysteriously run off again to rejoin them. Remsberg frees Ellen again and leaves her with the embattled soldiers as he rides off to the fort, not only for help, but to find the man who killed and scalped his Indian wife.
Written by
Doug Sederberg <[email protected]>
User Reviews: I first saw this movie as a small child on television, and twenty-two years later I finally got the guts to rent it last week to revisit it, and to see why I was so interested in it then. I recalled the exciting cavalry charges etc. and I even remembered the opening refrain of the strange musical score. I really enjoyed this movie unlike most of my childhood favorites. While the movie itself is alot like a John Ford Cavalry opera, it plays out alot differently. This one has more in common with the modern action movie, I think, than with most B-westerns of the 1960’s. The fast pace of the movie, unearthly fates of the dead, anti-heroism of the protagonist (James Garner), and well done scenes of horse-borne combat combine to create a Western-Adventure-Morality Play that I certainly recommend. There are multiple forces at play here. Among them the bizarre, scorched desert scenery, Garner’s quest for revenge for his dead Indian wife while pining over the married woman disgraced by her captivity with the Apaches, The underlying loyalty of Poitier’s former soldier character to his former comrades (despite his overtly self-serving statements) contrasted with the underlying self-promoting purposes of Bill Traver’s role as military commander. Too, I see shades of this one in 1993’s Geronimo by Walter Hill (burning vistas, Apaches hidden in the ground, Garner’s Remsberg character in Duval’s Al Seiber etc.) The musical score is off-beat for standard western fare, but who needs more drum beats, flutes, and rattles?! I think the score compliments the movie well, and is perhaps the best indicator that this production thinks outside of the box, even if it remains within it subjectively. This may not qualify as a classic, but I definitely think its a great action flick, and a breath of western fresh air with intriguing insights into race, warfare, culture, and the winning of the west.