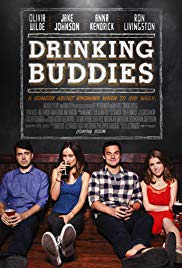 Storyline:
Luke and Kate are co-workers at a Chicago brewery, where they spend their days drinking and flirting. They’re perfect for each other, except that they’re both in relationships. Luke is in the midst of marriage talks with his girlfriend of six years, Kate is playing it cool with her music producer boyfriend Chris. But you know what makes the line between “friends” and “more than friends” really blurry? Beer.
Written by
Anonymous
User Reviews: From the threadbare ‘Hannah takes the Stairs’ to the layered, clever ‘Alexander the Last’, the quality of Joe Swanberg’s films has traditionally been erratic. ‘Drinking Buddies’ falls somewhere in the upper half of his range as it portrays how a couple of brewery co-workers deal with mutual sexual attraction while engaged in relationships with other partners. Kate and Luke use their love of beer as an excuse to hang out while concealing their amorous agenda and ambivalence in an alcoholic haze. The improvised dialog does deliver some amusing moments, but there are too many repetitive exchanges which dissipate the film’s energy.

The two lead actors create credible characters, but Swanberg doesn’t give them anywhere particularly interesting to go, and there doesn’t appear to be anything of great value at stake. Kate and Luke’s Romeo and Juliette saga turns into a circular song-and-dance routine, until their friendship becomes infected by frustration, leading to dishonesty and irritability. The concept is intriguing, but the film turns into an effective endorsement of sobriety. Swanberg has shown he can do better than this, and the end titles arrive just in time.

Storyline:Adam, a Catholic priest who discovered his calling as a servant of God at the relatively late age of 21, now lives in a village in rural Poland working with behavioral problem teens who fight and yell abuses...