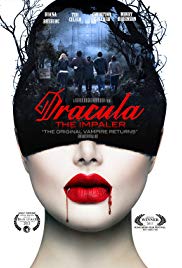 Storyline:
Seven high-school friends begin their Euro-trip at the actual castle of Vlad the Impaler where he supposedly sold his soul to the devil over 500 years earlier, but the decrepit castle’s past envelopes them in a bloody ritual.
User Reviews: The story created in this "return to Gothic horror" is a decent enough concept, but some of the more detailed portions of the story fell flat. I never really felt a connection to the characters or the vision that Hockenbrough was going for in "The Impaler". The story arc kept a mediocre drama but there were no real thrills and the whole atmospheric suspense was missing in this film. The characters were two dimensional and sort-of cliché, even though, it is a major hang-up within the genre, acceptable as long as the cast can sell it. Unfortunately the cast never really convinced me of who they were in "The Impaler".

The special effects in this one try to pull off the blood and guts nightmare but a few scenes failed to do so. The ones that did work created a decent practical effect. The only real problem and major irritation I have with "The Impaler" is that "if you are gonna make a movie featuring Dracula then you bloody well better have Dracula in your film!" Only two maybe three scenes even had the guy on screen. Just a lot of folklore and fabrications that were incorrect and blasphemous to the Dracula mythos, filled with inaccuracies about the Dark Prince. I didn’t really care for "The Impaler" , found the film’s inability to provide both horror or enough vampire in a film labeled horror and about vampires.

Storyline:Four adventurous friends find 50M in cash at a remote island only to discover it was left by the DEA for the Cartel in a rogue deal.User Reviews:

Storyline:Nick's rich Uncle makes a deathbed request: "Give away my fortune and help me save my soul." But the minute he starts, it all goes haywire. His evil twin steals his fiancé, and giving away the cash backfires...

Storyline:It's 1984 and outside a small-town nightclub, a group of 8th graders gather, grappling with a spate of recent suicides, UFO sightings, their absentee parents, and each other.User Reviews:

Storyline:A diverse set of characters find themselves together in a old diner in a small town on Christmas eve during a snow-storm. While a young expecting couple tries to make it home on a night that's anything but s...

Storyline:Katherine Morales, a woman not married to the President, runs for First Lady, but she winds up getting a better proposal than she ever expected. First Lady is a classic romantic comedy with the backdrop of P...