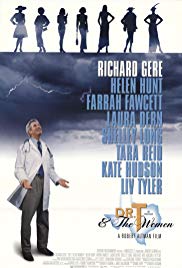 Storyline:
Dr. Sullivan Travis “Dr. T.” is a wealthy Dallas gynecologist for some of the wealthiest women in Texas who finds his idealist life beginning to fall apart starting when his wife, Kate, suffers a nervous breakdown and is committed to the state mental hospital. Dr. T’s eldest daughter, Dee Dee, is planning to go through with her approaching wedding despite the secret that she’s a lesbian and is romantically involved with Marilyn, the maid of honor. Dr T’s youngest daughter, Connie, is a conspiracy theorist freak who has her own agenda to everything, while Dr. T’s loyal secretary, Carolyn, has romantic feelings for him, which are not mutual. Dr. T’s sister-in-law, Peggy, meddles in every situation she stumbles into, while one woman, Bree, a golf instructor, is the only one who offers him any comfort and salvation.
Written by
Anonymous
User Reviews: I can think of few directors who have turned out so many quality films in late career as Robert Altman has. "Dr. T and the Women" is Altman’s latest, and in telling the story of a popular Dallas gynecologist and the females in his life, Altman has made one of his most enjoyable films yet. Richard Gere gives what has to be his best performance to date as Dr. Sullivan "Sully" Travis. Gere does not get enough credit for being a good actor, and with this performance he shows what enormous range he has. His Dr. T is so engaging and charming, that it is easy to see why he has the following he does. Gere’s performance is the centerpiece of a quirky, funny, and hugely entertaining film, one of the best of 2000.