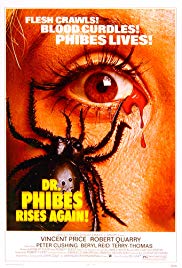 Storyline:
The moon rises at a predestined angle and awakens the sleeping Dr. Phibes three years later. To his dismay, he finds his house has been demolished and his papyrus scrolls stolen, the scrolls he needs to find the Pharoah’s Tomb in Egypt, where the River of Life flows. After identifying the source of the papyrus theft, he packs and leaves for Egypt with his assistant Vulnavia, still intent upon awakening his dead wife Victoria. The parties responsible for the theft of Phibes’ scrolls suffer an attrition problem as Inspector Trout chases him across the world.
Written by
Ed Sutton <[email protected]>
User Reviews: Some feel that this sequel to 1970’s The Abominable Dr. Phibes surpassed the original film with its all-out camp elan, wild-and-woolly murder sequences (it’s hard to imagine anything more skin-crawlingly gruesome than the Scorpion Throne sequence in this film), exquisite Deco Egyptienne sets and scenery-chewing performances by such stellar talents as Hugh Griffith, Terry-Thomas (a priceless cameo), Beryl Reid and Peter Jeffrey. Robert Quarry has probably his best role ever as the perfidious Biederbeck, and Valli Kemp makes a fetchingly arch replacement in the role of Vulnavia originated by Virginia North (Kemp’s Vulnavia is more in the vein of Maxfield Parrish, while North was arctically Deco). But it’s Vincent Price–"how ironic and how clever!"–who rules this bizarre, darkly comic universe of murders and ancient Egyptian occult wisdom. The score by John Gale is also worthy of considerable praise–one of the great horror scores of the latter 20th Century. When is the CD coming out?

I’ve seen this movie about 7 times, and every time I always notice some little quip or detail that escaped me on first viewing. For trivia buffs, a third film was planned, which was due to bring Phibes face to face with Hitler. Vincent Price was so incensed at the chopping of the original running time of Rises Again that he refused to have anything to do with the third project, so it was abandoned. Director Robert Fuest worked on the Linda Thorson season of the Avengers (the Takeover episode shows some of the Phibes style), and went on to produce a stylish send-up of one of Michael Moorcock’s future-sex fantasias.

Storyline:As the Boer War ends a South African soldier hides a cache of diamonds he finds on a body. He returns to the town he left three years earlier where his girl has married a disgraced English officer. Needing f...

Storyline:Waldimar Daninsky, a lone survivor of a Tibetian expedition, returns home to find his wife has been unfaithful to him. Carrying the curse of the pentagram (or pentagon, as stated by the monk who nursed him b...