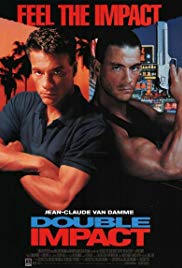 Storyline:
Jean Claude Van Damme plays a dual role as Alex and Chad, twins separated at the death of their parents. Chad is raised by a family retainer in Paris, Alex becomes a petty crook in Hong Kong. Seeing a picture of Alex, Chad rejoins him and convinces him that his rival in Hong Kong is also the man who killed their parents. Alex is suspicious of Chad, especially when it comes to his girlfriend.
Written by
John Vogel <[email protected]>
User Reviews: Double Impact (1991) was my favorite childhood Van Damme movie, beside Bloodsport was this movie my favorite. I grew up with this film I love this movie to death! Bolo Yeung was also in this movie as Moon, Zhang’s killer.

The fight at the end between Van Damme and Bolo Yeung was the best just like was in Bloodsport. The story was adrenaline action packed and Van Damme played double role in here and he did an excellent job as Alex and Chad two different characters. I always loved this movie and I love the action and the fight choreographer from Jean-Claude Van Damme, I like his spin kick and his martial arts in this movie. Van Damme fights the same guy from Bloodsport. I love this movie a lot, it is bloody full action packed fire guns.

What I love in this movie is a great supporting cast, Geoffrey Lewis was a great support cast as Uncle Frank who raised Chad. Alonna Shaw as Danielle Wilde was a great as Alex girlfriend. Their was one imaginary sexy scene that really did not mean anything. Corinna Everson as Kara as Griffith’s bodyguard was terrific, here we first time see a women who is a villain in a action movie. In the 90’s I don’t remember seeing any women been a villain. Corinna was a perfect choice for playing Kara. Philip Chan as Raymond Zhang was awesome he was even in John Woo’s Hard Boiled and Bloodsport. The movie it self reflects more on Van Damme’s life: Chad was really Van Damme, he was raised in Belgium in this film his character was raised in Paris, but with Frank they moved to America. Now after 25.years they come back to Hong Kong in which they track down Alex, together they avenge their parents death. Alex is a bad ass in this movie. He looks so scary, that even I wouldn’t dare to cross his path. I love Van Damme in two roles he is great. I have enjoyed this movie a lot and had a lot of fun.

The contrast between the two characters of Chad and Alex is amazing. The happy go lucky playboy and the brooding street fighting bad ass. You really do get the feeling that there’s two Van Dammes in the world and they’re right there on screen together. And Chad is one my favorite JCVD characters he’s ever played. I love the action sequences, the gun play, the fights and the story that works. In my opinion this movie is very underrated. It was my childhood favorite movie and it always will be.

I am giving a 10, because the movie has a good action and nice martial arts, but it also does have a plot hole that I don’t like.