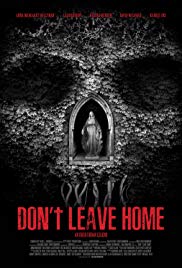 Storyline:
An American artist’s obsession with a disturbing urban legend leads her to an investigation of the story’s origins at the crumbling estate of a reclusive painter in Ireland.
User Reviews: While movies like Hereditary and It Follows get praise for being slow eerie movies, this movie takes it to an international level by creating a creepy story around an Irish urban legend, which is terrifyingly realistic.

The Celtic setting of the movie creates an unbelievably uncomfortable atmosphere which transcends in the incredible soundtrack. The directing is over average, but I do agree it’s nothing less than cheesy at some points. But the clever 70’s style of certain shots does the job of bringing us back into this eerie world.

The acting is also very good, especially for an indie. It’s hard to know who you can trust and it’s great to see a main actress that doesn’t sound or look like the dumb little damsel in distress.

Overall, it’s a movie that comes very close to being a classic, maybe only taken back from the fact that it lacks true novelty and, without being predictable, doesn’t bring anything new to the table. I’d recommend it to anyone who loves slow burners with a spiritual background that doesn’t try too hard to be its own thing and just lets things flow, making for a realistic, downright creepy story.