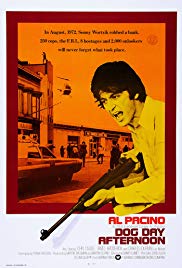 Storyline:
Based upon a real-life story that happened in the early seventies in which the Chase Manhattan Bank in Gravesend, Brooklyn, was held siege by a bank robber determined to steal enough money for his male lover to undergo a sex change operation. On a hot summer afternoon, the First Savings Bank of Brooklyn is held up by Sonny and Sal, two down-and-out characters. Although the bank manager and female tellers agree not to interfere with the robbery, Sonny finds that there’s actually nothing much to steal, as most of the cash has been picked up for the day. Sonny then gets an unexpected phone call from Police Captain Moretti, who tells him the place is surrounded by the city’s entire police force. Having few options under the circumstances, Sonny nervously bargains with Moretti, demanding safe escort to the airport and a plane out of the country in return for the bank employees’ safety.
Written by
alfiehitchie
User Reviews: What transfixes me throughout every scene of this sinewy, offbeat film is the extraordinarily pragmatic realism of the hurtles Sonny and Sal confront inside the bank. Not even twenty minutes into the film, we find we’re already seeing things absolutely no other crime film has ever included that are astonishing in their dramatic persuasiveness. The head teller and the bank manager picking apart Sonny’s plan with him. One clerk’s husband calls and asks what time the robbers will be through so he knows if he has to cook for himself or not. While ordering the bank manager to help him block the back entrance by moving a big desk, Sonny asks offhand why he’d hire a diabetic as a guard, and is told in ordinary person-to-person terms what a guard’s salary is and why poor old Howard has that job.

And when does Mulvaney the bank manager, played by captivating unknown character actor Sully Boyar, tell hostage-taker he’d like to see his family again but if someone must be taken, take him? When he’s helping his captor move a big desk to block the back. They sound like regular working urbanites so caught up in the daily grind of city life that they might as well be making small talk in an elevator. Later, the phone rings, Sonny picks up, it’s a sicko telling him to kill ’em all. Sonny hangs up after four seconds, moving on. The female tellers sit and sweat while giggling about the same silly things—"He said the f-word." "Well, I’m a Christian and my ears are not garbage cans."—in the thick of a hostage situation and a media circus. Poignant, real.

Every nuance of Pacino’s performance is incredibly realistic. He practically possesses the audience, as we can begin to expect certain things from him and care about him because he’s played by an actor who completely subsists as him. At points when characters speak of him off-screen, speaking of things that we are surprised to hear about him, that take us aback and color his image, Pacino has prepared the size for those turning points to fit in. His improvised scenes are exceptional as well, and are in fact some of the most riveting, nail-bitingly intense scenes in the entire film. In such scenes, he is matched by the great actor Charles Durning and Chris Sarandon’s becoming fulfillment of his role.

Indeed, this is by far Durning’s most riveting performance. He works so well here because in shouting matches with Sonny, he looks and sounds entirely his age, not a movie character. He’s fat, middle-aged, tired, just as surprised as everybody else. He runs short of breath, trying desperately to keep up with the pressure cooking higher all around him. As Det. Sgt. Eugene Moretti, Durning epitomizes the thankless job of a police officer more candidly and perfectly than any other movie cop I’ve ever seen. One of this stunning succession of brilliant scenes is the first time Sonny emerges to talk face-to-face with Moretti in the street, which begins with a protracted pin-drop silence and slowly, steadily, invisibly culminates in deafening, ear-splitting chaos.

Lumet opens the film with a montage of city scenes in NYC with a good getting-up-in-the- morning song like Elton John’s Amoreena and with the same indifference ends up on Sonny, Sal and their friend waiting outside a bank in a car, an image that just happens to continue. This is a great way to demonstrate the it-could-happen-anywhereness. Lumet’s overall direction of the film is beautiful, indicative once again of the masterful mainstay of cinema in the 1970s. The climactic final ten minutes are ruthless in their steadily unraveling, almost unbearably intense tragedy. It’s not only one of the most effective uses of sound to create drama I’ve ever seen, but everything concludes exactly as it would in reality.

Storyline:Three recruits land in Navy boot camp in San Diego: Potter from Kansas, wealthy Benson (who has experience with yachts), and dirt-poor Dan. Kansas gets in trouble for not having his cover. Dan has color-visi...

Storyline:When the spoiled 13 year old Nicole is expelled from school for the third time, her super rich daddy has her brought home in his private 727. However, in a storm the airplane gets damaged and the pilots and ...

Storyline:Wow - fifth grade. But what good is practically being a grown-up when the teacher's a big sourpuss?User Reviews: I always thought Recess was a really cute show, It was enjoyable and you could actually sit th...

Storyline:Underfunded and sidelined by men's athletics, the Lady Griz, as they came to be known, bloomed under the fresh Title IX regulations that brought equal funding, scholarships and facilities to women's collegia...

Storyline:April 20, 1999 Columbine High School was under attack by Eric Harris and Dylan Klebold. Sue Klebold, Dylan's mother, attempts to reconcile how the son she thought she knew, the son she loved could willingly ...

Storyline:A lonely hair stylist becomes obsessed with the lives of her clients and descends into murderous madness.User Reviews: Such a cool movie with an amazing concept This is not a fast paced slasher flick, so don...