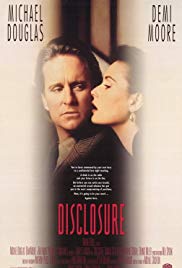 Storyline:
Sexual harassment is the theme, but here it is the man who is harassed by his new female boss. A high-flying executive, Meredith, is out to ruin her former lover, who she’s just beaten to the top job in an electronics company, using every trick in the book.
Written by
Rob Hartill
User Reviews: Michael Doulgas and Demi Moore head this fine piece of work based on Michael Crichtons’ novel. Douglas is Tom Sanders, a typical business man working with a fairly normal company. He is dark horse in the running for promotion, until Meredith Johnson(Moore) arrives. Meredith is an old fling, and she hasn’t forgotten the past. When a desperate attempt to open old wounds, or relive steamy times goes awry, Meredith is sickened by Toms’ monogamy, and wants revenge! Director Barry Levinson creates a brilliant conflict, which seems to grow heavy with each scene. The entire cast is phenomenal. Moore and Douglas are perfect in their roles, but the main attraction for my eyes, was the quick, smart, catchy performance of Catherine Alvarez by Roma Maffia. Film keeps a strong interest for the whole time, only lacking in some possible slow moments. Part of why the film works so well is the fact that Levinson keeps it intellectual, dealing with adults, and the way they handle these situations. Sex is not a crutch to use for the main stars, who, at the time, were rather big. Instead, sex is portrayed as the key power in the situation. Catherine Alvarez states in the film "Sexual harassment is not about sex, it’s about power. She has it, you don’t". Pretty catchy way to portray sexual harassment. Technology is later brought in as a power to…but why should I say anything more? See the film for yourself.