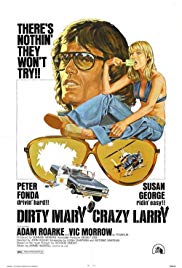 Storyline:
Larry Rayder is an aspiring NASCAR driver, Deke Sommers is mechanic. As they feel they collectively are the best, the only thing that is holding them back is money to build the best vehicle possible. As such, they decide to rob a supermarket’s office of the money in its safe to pursue their dream. On the most part, their robbery is successful, although their plan breaks down in its end phase, which doesn’t allow them as much getaway time as they wanted. Another problem they face is an unexpected third person in their getaway, Larry’s one night stand Mary Coombs, who doesn’t like the fact that Larry ran off on her, although she eventually also says that she doesn’t want any of the money. With a police scanner and two-way radio in their souped up Dodge Charger, they try to outrun the police, who have an identification of their vehicle, and a general description of the three. The police pursuit is led by the tenacious Sheriff Everett Franklin, who knows he and his team can catch them, …
Written by
Huggo
User Reviews: Although not being born until the tail-end of the 1970s, I none-the-less consider it "my" decade. I love all the great films to have come from the era, particularly those many "Good Ol’ Boy" chase movies. My favourite of which is probably ‘Smokey And The Bandit’ – okay, it’s maybe not got the strongest of plots, but it’s brought to life by Burt Reynolds and a likeable cast. Which is probably one of the reasons that I took a little time to warm to ‘Dirty Mary Crazy Larry’.

The premise and characters for this movie are good ones, for the simplistic genre at which they’re aimed. But I found it took me quite a while to really warm to any of the characters, and felt that if one thing the film did suffer from, it was a little mis-casting here and there.

Peter Fonda’s Crazy Larry SHOULD be an interesting character. A sort of deranged would-be race-car driver. Sadly, while Fonda is a more than credible actor, he doesn’t quite pull it of for most of the film. His Crazy Larry to me didn’t quite seem crazy enough. In a number of places he actually felt to be routinely trotting off the lines, and not really giving that much thought to the actual character and the things that (excuse the pun) would drive him. The character needed to be more unpredictable, more hell-bent on what he’s doing. Well, I suppose all of those things WERE there in his character, just not all that convincingly.

I probably found the hardest character to, well. to LIKE, was Susan George as Mary. A terrific actress given the right material, but something about her character really didn’t work for much of this movie. Actually, maybe I’m being a little fair – I’m not so sure that it was less George’s fault, more just the way here character is written. It’s great that the character isn’t written as some super-babe, she’s basically trailer trash, but even so… it took some effort from me to even get used to her. Technically, both Larry and Mary as characters should have been great; Sadly, it was quite late on into the film before I really started to care about either of them.

Adam Roarke’s character, mechanic Deke, is possibly the best of the trio brought to life on-screen, as he came across as a little more 3-dimensional. It’s a shame that he doesn’t really get as much change to shine as he could have done.

The only other character that I can say I did particularly like was Vic Morrow as moody law-man Everett Franklin, sticking a finger up to proper Police procedures and determined to catch the unknown robbers at any cost.

I think that one of the main reasons it took me some time to really get into this film was down to the actual reasoning behind the robbery in the first place. In movies such as (sorry to have to use it as an example again) ‘Smokey And The Bandit’, the Bandit has a REASON for doing what he’s doing. He’s a folk hero, he’s always got a twinkle in his eye and never seriously hurts anybody. Now I’m not saying that all anti-heroes in this type of film should be all very heroic and with ‘justifiable’ reasons for their actions, but one of the reasons I found it hard to warm to any of the three leads in this movie, was that – unless I missed something – there was no real reason why Larry and co. did what they did. Sure, they wanted the money, which is reasonable enough in any chase movie, but why pick the store-owner that they did? If the store-owner was portrayed as more obnoxious, or if he’d somehow previously aggravated Larry in some way, it would have felt much better. Then we’d have more reason to cheer the anti-heroes of the picture on as they raced on their way.

But wait… reading all that, you might thing I’m over-criticising; that I think it’s a BAD movie. No no, not in the least.

Well, one of the many things I DID like about it was the ’69 Dodge Charger. Belovedly identified to myself and a whole generation as being the ‘General Lee’, from the cult (and, for the simplistic silliness that it was, much underrated) series ‘The Dukes Of Hazzard’. Actually, when I heard that there was a Dodger in this film when it was coming up on TV, it was one of the main things that pulled me in! The ’69 Charger, what a classic car. I’m no car expert in the least, but you don’t have to be an expert on something just to know when it LOOKS good. Just to look at it, those cars have character, and you know they can really shift even without hearing the engine roar.

In fact, I’d say that the film pretty much picks up as soon as they acquire the Dodge. Not for the car itself (don’t get me wrong – I’m hardly a car fanatic), it’s just from about that point that the story really starts settling down, as do the characters.

One of the strong points of this film is that it’s filmed very well, in fact, I have to say, show much better than the great majority of it’s similar counterparts (‘Smokey And The Bandit’ et al). The natural scenery is used to great effect, really giving the feeling of racing along all those dirt roads. There are many fantastic shots, including numerous sequences shot from a following film car of the Dodger (and the Chevy before it) tearing along the roads, and the several shots at the cross-roads where the Police hope to entrap the trio. Many critics say that we only watch movies like this for the big car chases and crashes, and, let’s face it, that IS the big pull, but it being well-shot, making good use of the natural countryside such as in this movie really helps bring things to life.

But shots of the cars racing along, and particularly in the terrific helicopter sequence towards the end, now THEY’RE well done. I’d go as far as to say they’re definitely amongst the best I’ve seen in any film of the era that falls into this genre.

For all that I’ve slated the actors / characters above, it must be said that none of them are outstandingly bad – far, FAR worse acting has been seen on the screen in many other films. As the film went on, I did find myself warming to the anti-heroes a little bit more. There’s a good scene between Mary and Deke where, while Larry is fixing the damaged Charger, they sit down and talk about their circumstances. Now I’m not really one for deep "character development" (not in such a simplistic genre), but I found that it did help me identify and care about the characters just a little bit more. It’s just a shame that this scene is used so late on in the story – it could have been used to much better effect earlier in the film, when we were still trying to actually care about any of them.

And the ending. What a great ending. Without giving too much away. it’s totally unexpected, really packs a punch, and actually finishes the story off very well.

So, to summarise, while I wouldn’t class it amongst the very best of the many 70s redneck chase movies, and it does suffer from some poor casting, if you like this style of film and have seen it’s better counterparts, then you can do far worse than look here for some late-night escapism.

The excellently shot chase sequences (and the terrific ending) defiantly make up for the shakier bits earlier on.