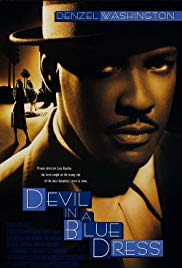 Storyline:
It is 1948 in LA and Ezikeal “Easy” Rawlins, an African-American World War II veteran, is looking for work. At his friend’s bar, he is introduced to a white man, DeWitt Albright, who is looking for someone to help him find a missing white woman assumed to be hiding somewhere in LA’s Black community. This woman, Daphne Monet, happens to be the fiancée of a wealthy “blue blood,” Todd Carter, who is currently the favorite in the city’s mayoralty race. Daphne Monet is known to frequent the Black jazz clubs in LA. Easy, innocently, accepts Albright’s offer; however, he quickly finds himself amidst murder, crooked cops, ruthless politicians, and brutalizing hoodlums. This is a Chandler-esque “who-done-it” with an African-American theme.
Written by
Joel Schesser <[email protected]>
User Reviews: To call this one of the most underrated films of the last ten years, is an understatement. This film is up there with Chinatown’ and L.A Confidential. .

Denzel Washington is cool, and smart. Don Cheadle is stand out as the cold killer with a smile, mouse.

But the real praise must go to Carl Franklin, who proves that One false move’ was not just a fluke

As much as I liked the film ‘L.A. Confidential’ my problem with it was that a lot of black characters where being brutalised, without any chance to fight back. In this film they fight back. We have a black hero, someone who is as smart anyone else and in some cases smarter.

I hope that one day someone will film the rest of the Easy’ Rawlins books.