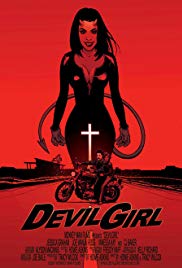 Storyline:
Fay is a small town girl on a cross country road trip, trying to escape her own reality after the death of her father. When her muscle car breaks down during a drag race she finds herself stranded along route 66 in an isolated desert town. Short on cash, she makes a series of choices to make enough money to repair her car. After encountering a neurotic, drug abusing clown she finds herself sliding down a dark spiral. Soon thereafter, her road trip starts to devolve into a living nightmare. Trapped and desperate, she fights to regain her identity while navigating through a host of locals; a creepy motel clerk, an overzealous preacher, and a sexy temptress with horns and a tail.
Written by
Tracy Wilcox & Howie Askins
User Reviews: In a world where teenage vampires are the pop norm, "Devil Girl" is a welcome breath of fresh air. An aggressive soundtrack, creepy, surreal imagery and a fast paced mind [email protected]%! of a story makes for a really unique counter culture film.

While admittedly the story is far from typical,(and frankly, oddly amorphous)it is fun feeling that at any moment, that which seems to be reality might be revealed as yet another head trip fantasy. With its fast cars, sexy girls and psychedelic drugged out visuals, this is a flick for fans of movies like "Natural Born Killers" and "Fear and Loathing in Las Vegas." Some folks just aren’t going to get it, but for others, it is cult dynamite.