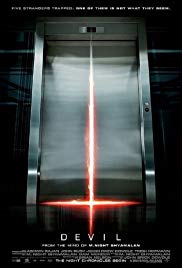 Storyline:
In Philadelphia, Detective Bowden is still grieving for his wife and son, killed in a hit-and-run five years ago. When someone jumps from a skyscraper onto a truck, Bowden is sent to investigate. Meanwhile, five strangers are trapped in an elevator in the building where the jumper committed suicide. The communication radio in the elevator is broken but the guards, Lustig and Ramirez, observe the individuals via CCTV as events unfold. Tensions run high among those trapped, so Lustig calls the police and Detective Bowden assumes the case. Without being able to contact the individuals, he tries to work out who they are, but he can only account for four of them. Time is running out for the occupants of the elevator, as Bowden realizes he has to get them out quickly.
Written by
Claudio Carvalho, Rio de Janeiro, Brazil
User Reviews: M. Night Shyamalan is one of those love him or hate him directors for whom there’s no middle ground, so it hasn’t helped that he’s given his detractors a lot to crow about with his recent downward spiral with successively poor to abysmal movies ranging from The Lady in the Water to 2010’s biggest stinker, The Last Airbender. It’s been a critical pile-on for the one time golden boy who wowed audiences and critics alike with The Sixth Sense and Unbreakable.

Things have gotten so bad that when the trailer for Devil hit theatres with the on-screen tag line "From the Mind of M. Night Shyamalan", guffaws were reported from audiences and on-line gadflies like Perez Hilton had a field day posting viral videos mocking the promos.

All of which is too bad because not only is Devil a compelling, riveting bit of movie making, but Shyamalan’s involvement was limited to writing the story and co-producing, which, given his recent track record, was probably for the best.

Smartly directed by John Erick Dowdle, whose last effort was Quarantine, the equally tight and faithful remake of the Spanish horror REC, Devil marks the first instalment in a trilogy of films dubbed The Night Chronicles, which revolve around the supernatural in modern urban settings (the second film is tentatively titled Reincarnate, about the jurors of a murder trial who are haunted by a supernatural being, and Unbreakable 2 rumoured as the third instalment).

In Devil’s case, the plot could easily function as a textbook case of film school 101, tasking a writer and director to fashion a small story, restricted in scope, set in the cramped environment of a stalled elevator. You can almost hear film school professors saying "if you can pull this off, you can do anything". Happily, Dowdle succeeds with flying colours.

Devil is as compelling as the story is confined. It’s smart from beginning to end, almost like the hybrid elevator equivalent of Hitchcock’s Lifeboat and Agatha Christie’s Ten Little Indians. A disparate group boards a Philadelphia office tower elevator, only to become trapped between floors and mortally victimized by someone among them who clearly possesses supernatural ability every time the lights flicker and momentarily go out.

Don’t look for spoilers here as I won’t be providing any. Suffice to say that Devil is one of the most smartly written, acted, and directed films I’ve had the pleasure to enjoy this year.

Who knows, maybe this is the beginning of Shyamalan’s road back to respectability. If nothing else, it shows that he still has the chops as a top notch story teller.