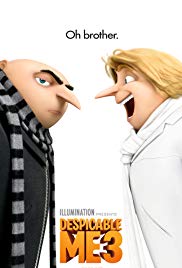 Storyline:
After he is fired from the Anti-Villain League for failing to take down the latest bad guy to threaten humanity, Gru finds himself in the midst of a major identity crisis. But when a mysterious stranger shows up to inform Gru that he has a long-lost twin brother-a brother who desperately wishes to follow in his twin’s despicable footsteps-one former super-villain will rediscover just how good it feels to be bad.
User Reviews: The first two ‘Despicable Me’ films were fantastic family fun, but, despite absolutely loving the scene-stealing minions ‘Minions’ was underwhelming (giving the sense, though in all fairness they were not well utilised in their own film, that the minions are better as supporting characters rather than leading).

‘Despicable Me 3’ is a disappointment after the first two films but is better than ‘Minions’. There is a lot to like about it, but it does feel very uneven and gives the sense that the ‘Despicable Me’ franchise has somewhat run its course. None of it reaches terrible depths though, just that the film could have been much better considering what came before it.

Once again, the animation is wonderful. There are rich bright colours, lovingly and appealingly designed characters (nothing looks awkward like some of the human character designs in ‘Minions’), meticulously detailed backgrounds and some real visual invention. ‘Despicable Me 3′ boasts a killer soundtrack that makes one nostalgic for the 80s (with Michael Jackson and Madonna), Heitor Pereira’s score is suitably funky and Pharrell Williams’ own contribution (especially the heartfelt and cute "There’s Something Special") is note-worthy too.

Some of the writing is witty, sharp and smart and there are some wildly funny and beautifully timed sight gags. One cannot say that ‘Despicable Me 3’ doesn’t have any heart either, there are some sweet and touching moments here. The characters are likable, especially Gru and the minions (who once again steal scenes despite being underused somewhat), and the voice acting is excellent, Steve Carrell has still got it and proves that with good material and with a good character (like with Gru) he is a very talented comic actor (though he has shown a wider range than that too).

However, other parts of the humour comes over in a scatter-shot way and suffer from a flabbiness and predictability. To me the villain was also a little bland, didn’t find him particularly memorable or that much of a threat, and some of the soundtrack is compromised by the humour coming by so thick and fast that a few of the songs don’t register or don’t feel necessary.

The most problematic aspects are the story and the pacing. The pacing occasionally is perfect but at some points it feels tired and at many other points it’s almost too hyper-active and jumpy so a lot of the film feels rushed. The story suffers from being over-stuffed and bloated, it’s basically three or four plots stuffed into one and not enough time is spent with either. The focus jumps around a lot with some of the transitions on the choppy side so the film and the story-line can feel disjointed.

Overall, not a bad film at all but was expecting better considering how good the first two ‘Despicable Me’ films are. 6/10 Bethany Cox