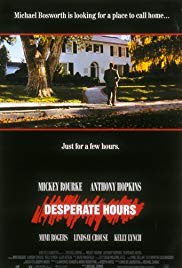 Storyline:
Michael Bosworth is a psychotic criminal who is about to go on trial however, he seduces his lawyer into helping him escape. But as they try to make their getaway, she’s left behind. He decides to wait for her to come to him, so he decides to hide at the house of the Cornells. Now it appears that the Cornells have problems of their own. The husband and wife are separated. And there’s an FBI agent after them who is using the lawyer to lead them to Bosworth.
Written by
<[email protected]>
User Reviews: This is one of those movies that is very difficult to give a star rating because its high entertainment value is due to the fact that it’s almost completely terrible.

A remake of the 1955 Humphry Bogart-Fredric March potboiler, DESPERATE HOURS is an unrelentingly bizarre piece of exploitation trash. There’s virtually nothing "good" about it. The screenplay ranges from scattershot to just plain off-the-wall weird, the performances are some of the most over-the-top ever committed to film and the direction is borderline psychotic. Director Michael Cimino and producer Dino De Laurentiis once again prove that they are more capable than anyone else in the film industry of taking a potentially good idea and drowning it in excessiveness.

Mickey Rourke and Anthony Hopkins are both excellent actors. They are also actors who go from mannered to berserk very quickly. Both chew the scenery as if their lives depend on it. Mimi Rodgers is wooden even during emotionally intense scenes, Shawnee Smith is distraught before the home invaders show up and Lindsay Crouse is both wooden and over-the-top at the same time.

Kelly Lynch is the only actor who turns in even an appropriate performance, evoking a sense of hopelessness and panic from the start that makes you feel for her character, even if she has dug her own grave. This doesn’t help a bewildering early scene in which her blouse spontaneously pops open to reveal her bare breasts make any more sense, however.

There are a lot of interesting plot and characterization ideas floating around the proceedings but none of them are ever fully developed. It reminds me of Cimino’s HEAVEN’S GATE and De Laurentiis’s DUNE, two similarly flawed but occasionally brilliant disasters which have grown better with age. Maybe with time, viewers will begin to see the tight, complex thriller struggling to break through the mess that is DESPERATE HOURS.

But all this analysis begs the question, would the movie have been more entertaining had it been put together more coherently? The answer is: probably not.

Storyline:Lost for centuries, the legendary Sword of Azundati--a magnificent blade imbued with an unlimited magical power--is the only thing on Earth that can defeat the dark necromancer, Kalungo, and his demonic mini...

Storyline:U.S. Marine Nelson Sanchez has run out of time. After being honorably discharged and returning to his economically depressed hometown, Nelson must face the consequences of the violent past he thought he had ...

Storyline:Widely known for their valiant acts of supernatural bravado, the bogus ghost-busters, Wilhelm and Jacob, or the Brothers Grimm, try their best to banish all sorts of evil in early-19th-century French-occupie...

Storyline:Two New Orleans paramedics' lives are ripped apart after they encounter a series of horrific deaths linked to a designer drug with bizarre, otherworldly effects.User Reviews: There are certain topics, that a...

Storyline:Beer bashes in the ring. Shocking Stunners on the boss. Venomous attacks against The Rock. Vehicular mayhem everywhere. These are the moments that made "Stone Cold" Steve Austin a WWE Legend.User Reviews:

Storyline:In early 2016, Dan Elswick embarked to document BANE's final US tour. Starting as a love letter to his favorite band, it turned into much more. Beginning at a time when hardcore music strayed from its punk r...