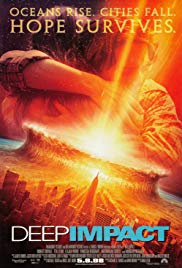 Storyline:
Journalist Jenny Lerner is assigned to look into the background of Secretary Alan Rittenhouse who abruptly resigned from government citing his wife’s ill health. She learns from his secretary that Rittenhouse was having an affair with someone named Ellie but when she confronts him, his strange reaction leads her to reconsider her story. In fact, a comet, discovered the previous year by high school student Leo Biederman and astronomer Dr. Marcus Wolf, is on a collision course with the Earth, an Extinction Level Event. A joint US-Russian team is sent to destroy the comet but should it fail, special measures are to be put in place to secure the future of mankind. As the space mission progresses, many individuals deal with their fears and ponder their future.
Written by
garykmcd
User Reviews: Why is it that everytime someone had an idea for a movie in the late 1990s someone at another studio decided to bring out a similar movie ? DANTE’S PEAK and VOLCANO both came out at the same and both featured volcanoes suddenly exploding into life , and there’s several other examples of this unimaginative " let’s makes a movie similar to a studio rival " movie pitch from the 1990s . Perhaps the best example is DEEP IMPACT and Armageddon which feature a giant comet going to collide with planet Earth . I should point out though that both movies were pitched to different audiences . Armageddon is marketed to the unthinking macho American audience . It stars Bruce Willis and Ben Affleck , is directed by Michael Bay and is produced by Jerry Bruckheimer so unsurprisingly it’s a pile of expensive effects laden bubblegum . DEEP IMPACT came out a couple of months previously and is by far the better movie . However it is flawed

I think the problem with DEEP IMPACT is that it’s probably produced to appeal to women . The main protagonist is female and there’s several sub plots involving family issues ( " Gee Mom I hope the end of the world doesn’t ruin my weekend " ) , oh and a bit of romance too . This doesn’t ruin the movie but I did find the heroine’s trembling lip and tears in her eyes in every emotional scene grating and the movie does lapse into terrible mawkishness several times . I also found the concept of a " lottery draw " to send people into deep bunkers where they have a chance of surviving the apocalypse unconvincing . Yeah right I sure the American president is going to give trailer trash and red necks to chance to come live with him . America might be a classless society but it’s not that classless and considering Bill Clinton ( Often described as " America’s first black president ) was in the White House at the time do we think that either men or ugly women would have a chance of being selected ? About as much chance as Bill inviting Hilary into the bunker I imagine

There are a few good points about the movie that stops it becoming an overproduced disease of the week movie . One thing is the cast , Armageddon had Bruce Willis and Ben Affleck while DEEP IMPACT has Morgan Freeman and Robert Duvall . Do I have to spell out what movie has the better cast ? Okay DEEP IMPACT isn’t a career highpoint for either actor but they do bring serious class to the production and there’s lots of familiar faces on screen like Frodo Baggins and the bad guy from MISSION IMPOSSIBLE 2 . The special effects are very good and there is one absolutely superb scene on a highway where thousands of bickering people are in gridlock , they slowly stop arguing and fighting amongst themselves as they look up and see the meteor pass overhead . On paper this scene might have seemed ineffective but on screen it’s breath taking with a deep emotional impact

So in my humble opinion DEEP IMPACT is the better of the two movies and is probably the best comet/meteor movie ever made . It is flawed and could have been better especially if the producers cut out of the chick flick stuff but a good cast and some good scenes stop it from being worse than it could have been