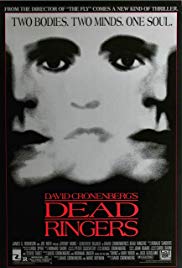 Storyline:
The Mantle brothers are both doctors – both gynecologists – and identical twins. Mentally however, one of them is more confident than the other, and always manages to seduce the women he meets. When he’s tired of his current partner, she is passed on to the other brother – without her knowing. Everything runs smoothly, until an actress visits their clinic, and the shy brother is the first to fall in love. Will they be able to ‘share’ her ?
Written by
Colin Tinto <[email protected]>
User Reviews: Growing up together as social outcasts with only each other for company, twins Elliot and Beverly Mantle become very close. This closeness becomes more like them both sharing one self in two bodies as they study in the same area and eventually become experts in the field of gynaecology. They share everything and few can tell them apart; an arrangement that works well until Beverly falls for a patient (Claire Niveau) and finds that there are things he doesn’t want to share with Elliot. As Bev confronts the idea of them being separate for the first time ever, he starts to fall apart mentally and, when Elliot tries to reach out and help him he too is drawn into confusion over identity and an inability to find where one of them stops and the other starts.

Being a Cronenberg film I knew to expect body horror and, shall I say, an ‘unusual’ theme and in many ways the film delivered in spades but in a much more cerebral fashion. The plot is not easy to explain but it is a totally convincing breakdown of both Elliot and Beverly as they lose contact with the lines between them (if the lines ever really existed). Of course it is rather extreme but it is relentlessly interesting in terms of the script and the characters. The gynaecological part of the film allows Cronenberg to explore his more usual body horror stuff but this all came second to the much more interesting material that exists in the script. Cronenberg appears to be as fascinated as me by the characters and he directs with a cold eye, letting the creepy atmosphere come from not only the story but every shot, every set and every performance; not only this but this is one of his more accessible films without losing much of what makes Cronenberg Cronenberg.

Of course a massive part of the film working is two perfect performances from Jeremy Irons, who I have not seen better in any other films. Using special effects as well as the old ‘over the shoulder’ technique, Irons is able to convincingly be on screen in two characters at the same time, but it is not the shot framing that makes it convincingly two characters, it is Irons’ performance that does that. His Beverly is so feeble and has a convincing breakdown; while his Elliot appears much more together but suffers in a different way from the same struggle. Obviously being identical, it is due to Irons that the two characters come across so very different but yet seem just like the same person. In every little scene he manages to stay in character no matter what  it’s hard for me to describe, you need to really see it for yourself. Bujold is good in support early on but, as the twins’ story gets more complex, her characters feels a bit intrusive and uninteresting, but generally she is good. However, to talk about anyone beyond this is to suggest there is room for them in the film  there isn’t. Instead the film is pretty much dominated by two people  and they are both Jeremy Irons, producing two great performances that were vital for the film to work.

Overall this may be a little too weird for some viewers but many more will find it to be one of their favourite Cronenberg films on the basis that it has the qualities that makes him him but is also a lot more accessible as well. The body horror is there in the background but it is the psychological scarring and confusion that is of much more interest; the script is great even if the plot goes to the usual Cronenberg excesses but it is two perfect performances by Irons that makes it all come together in a compelling and interesting film.

Storyline:A former pastor who walked away from his calling returns to his small hometown to discover that a mysterious fire tragically struck a local family. When he learns that his childhood friend is implicated in s...

Storyline:Two parallel stories of Japanese and American WWII enemies play out on the island where they fought 60 years prior. They meet face-to-face for the first time and their adventures take them into the jungle wh...