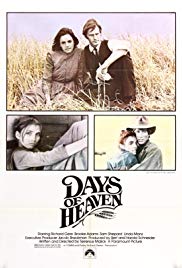 Storyline:
Bill and Abby, a young couple who to the outside world pretend to be brother and sister are living and working in Chicago at the beginning of the century. They want to escape the poverty and hard labor of the city and travel south. Together with the girl Linda (who acts as the narrator in the movie) they find employment on a farm in the Texas panhandle. When the harvest is over the young, rich and handsome farmer invites them to stay because he has fallen in love with Abby. When Bill and Abby discover that the farmer is seriously ill and has only got a year left to live they decide that Abby will accept his wedding proposal in order to make some benefit out of the situation. When the expected death fails to come, jealousy and impatience are slowly setting in and accidents become eventually inevitable.
Written by
Theo de Grood <[email protected]>
User Reviews: Days of Heaven (1978) ****

"Nobody’s perfect. There was never a perfect person around. You just have half-angel and half-devil in you."

This line delivered by Linda Manz in Terrence Malick’s gorgeous masterpiece, ‘Days of Heaven,’ sums up everything you need to know about life on earth. Much of Malick’s themes have been devoted to man versus nature, and the idea of perfection is not outside that realm – imperfection is the nature of mankind.

Richard Gere, in his greatest performance, plays Bill, a hot headed, lower class worker, who in a moment of mistake accidentally kills his boss in a Chicago factory. We see that the boss is hassling Bill, but we never know why, we just see faces but no distinguishable voices over the roar of the factory. Bill, his sister (Manz) and his girlfriend Abby, played by Brooke Adams, take off for the panhandle, hitching a ride on a train. Bill and Abby tell everyone that they are all brothers and sisters, because as you know, "people talk." They find work on a farm owned by the rich farmer, played by Sam Shepard. Many other films would make the farmer the bad guy, giving him trade mark heel characteristics, but Shepard’s farmer, who we learn is dying, is soulful, and yearning for love. He see’s Abby, and is interested, and eventually will ask her to stay – after Bill hears the doctor tell him he has about a year to live. They decide to stay, and after some persuasion from Bill, Abby will marry the dying farmer so that they can be heir to his fortune. Suspicions arise, and hearts and lives are broken, and the Days of Heaven will come to a halting end.

The cinematography is some of the most breathtaking ever captured on film. ‘Days of Heaven’ could even considered a masterpiece for its aesthetic beauty alone, if the story were not so terrific. Everything about the film is magnificent. Ennio Morricone’s score is haunting and beautiful. You will remember it forever, along with Linda Manz’ unforgettable narration, likely one of the greatest voice overs in film history. Many have criticized Malick’s distancing techniques and muted emotions. We are always kept at arms length away. But these people don’t realize that the story is a memory, a memory from the real main character – Linda. Also, in a method that Robert Bresson used, by distancing us emotionally, it leaves us to add our own emotions and imaginations in the story, heightening the power of the film, as long as you are willing not to be spoon-fed what to think.

Terrence Malick is a filmmaker who came out of nowhere with his talents already fulfilled, and he has not stopped since. His films are filled with such heartbreaking beauty and symbolism, and he is one of the few living filmmakers who truly are creating art, rather than just entertainment. He had one of the greatest debuts ever, in the mesmerizing and haunting ‘Badlands,’ the deepest and most philosophical ‘The Thin Red Line,’ which is likely the greatest contemporary war film (as suggested by the late Gene Siskel)and the stunningly beautiful ‘The New World.’ His films are deep and meaningful, and to get into the underlying symbolism and themes of them here would be pointless, and better saved for a long essay.

Days of Heaven is one of the greatest, and most beautiful films ever made. Cinema is at a low point recently, but as long as Terrence Malick is still making films, we still have some heavenly art to look forward to.

PS – Hopefully someone like Criterion will create a new DVD, as the current one has some soundtrack problems. Imagine seeing it restored, visually and audibly.