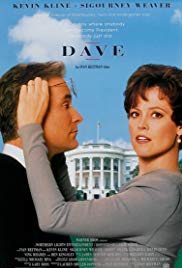 Storyline:
Bill Mitchell is the philandering and distant President of the United States. Dave Kovic is a sweet-natured and caring Temp Agency operator, who by a staggering coincidence looks exactly like the President. As such, when Mitchell wants to escape an official luncheon, the Secret Service hires Dave to stand in for him. Unfortunately, Mitchell suffers a severe stroke whilst having sex with one of his aides, and Dave finds himself stuck in the role indefinitely. The corrupt and manipulative Chief of Staff, Bob Alexander, plans to use Dave to elevate himself to the White House – but unfortunately, he doesn’t count on Dave enjoying himself in office, using his luck to make the country a better place, and falling in love with the beautiful First Lady…
Written by
Scott Nisbet <[email protected]>
User Reviews: "Dave" should have been a pure mess of a movie, but instead it is a highly enjoyable film which has great elements of comedy and drama. Kevin Kline stars as the title character who must impersonate the president of the United States after the real president suffers a massive heart attack which has left him in a coma. "Dave" goes for laughs, but also has a great deal of drama which keeps the audience intrigued throughout. Frank Langella does some of the best work of his career. Sigourney Weaver, Ving Rhames, Charles Grodin, and Ben Kingsley are all perfectly cast in supporting roles. The screenplay is smart and the direction never loses its focus. 4.5 out of 5 stars.