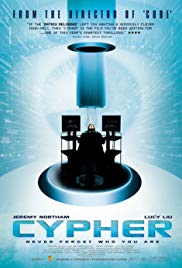 Storyline:
Hoping for a more exciting life than the suburban drawl he currently inhabits, nerdy salary man Morgan Sullivan takes a job as an industrial spy at Digicorp, a global computer corporation. Digicorp assigns him the duty of flying to various conventions around America, recording the speeches that are made. But when Sullivan meets a mysterious woman he begins to realize that his job may not be what it seems, as he descends into a dark underworld of brainwashing and struggles to maintain his own identity.
Written by
[email protected]
User Reviews: Vincenzo Natali’s feature debut ‘Cube’ was in my opinion the best science fiction movie of the 1990s. By "science fiction" I’m not meaning Star Wars style space opera aimed at 13 year olds, but mind expanding storytelling in the tradition of Philip K. Dick, Robert Silverberg and William Gibson. Or movies like ‘Bladerunner’, ‘Brazil’, ‘Dark City’ and ‘eXistenZ’, and yes (just in case you think I’m a mindless Lucas basher) ‘THX 1138’, a movie which Natali incidentally cited as an inspiration for ‘Cube’. It’s been a long wait but ‘Cypher’ is certainly worth it. This is a very stylized and cerebral film which Natali describes as being "Kafka meets James Bond", and he’s not joking. There have been a few Philip K. Dick adaptations in the last few years but they always seem to lose the quirkiness and intelligence of his work and degenerate into big expensive action movies. ‘Cypher’ isn’t actually based on a PKD story but in many ways it’s the closest thing to his fiction yet seen on a movie screen. Apart from the two leads the cast is made up of Canadian character actors, which gives it a freshness missing from many contemporary Hollywood productions. ‘Cube’ co-star and long time Natali friend David Hewlett has a memorable role as the creepy Vergil Dunn, keeper of The Vault. He gives one of the best performances in the movie. Incidentally, also keep an eye out for a brief cameo by Valerie Buhagier, star of Bruce McDonald’s cult favourites ‘Roadkill’ and ‘Highway 61’ in one of the conference scenes. The main stars are unusual picks. Brit actor Jeremy Northam has appeared in a few big American movies but is still pretty much unknown to most audiences. He uses this to his advantage and gives a terrific performance. I honestly can’t imagine anyone else doing this difficult role any better. Lucy Liu plays the femme fatale part to perfection. Maybe she’s just trying to get indie cred by appearing in ‘Cypher’, but who cares when she gives a good performance in a great movie. Plus she looks damn fine! ‘Cube’ has already become a cult favourite, and there’s no doubt in my mind that ‘Cypher’ will do the same. I think audiences will be discovering both movies for years to come. Vincenzo Natali is shaping up to be one of the most exciting genre directors currently working and I’m really looking forward to what he comes up with next!