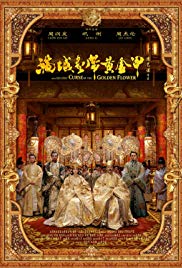 Storyline:
China, Later Tang Dynasty, 10th Century. On the eve of the Chong Yang Festival, golden flowers fill the Imperial Palace. The Emperor (Chow Yun Fat) returns unexpectedly with his second son, Prince Jai (Jay Chou). His pretext is to celebrate the holiday with his family, but given the chilled relations between the Emperor and the ailing Empress (Gong Li), this seems disingenuous. For many years, the Empress and Crown Prince Wan (Liu Ye), her stepson, have had an illicit liaison. Feeling trapped, Prince Wan dreams of escaping the palace with his secret love Chan (Li Man), the Imperial Doctor’s daughter. Meanwhile, Prince Jai, the faithful son, grows worried over the Empress’s health and her obsession with golden chrysanthemums. Could she be headed down an ominous path? The Emperor harbors equally clandestine plans; the Imperial Doctor (Ni Dahong) is the only one privy to his machinations. When the Emperor senses a looming threat, he relocates the doctor’s family from the Palace to a …
Written by
Sony Pictures Classics
User Reviews: Despite the millions of chrysanthemum flowers, ten thousand soldiers and three prominent male cast (Chow Yun Fatt, Jay Chou and Liu Ye), one thing will capture your attention. Make that two.

Gong Li and her titillating assets have almost overshadowed everything else in the movie. While it may not be historically accurate for 10th Century Tang Dynasty palace females to dress so scantily, director Zhang Yimou obviously wants to make a stylistic statement right from the opening scene.

His play with colours was apparent from Hero. Curse of the Golden Flowers presents a kaleidoscope in its grandeur palace setting and elaborate costumes. The final fighting scene lead by Prince Jai (Jay Chou playing Jay?) the prince with golden armored warriors trampling over chrysanthemum is nothing short of impressive.

Jay Chou had a difficult time playing Prince Jai, which required more complexity than a cool rider in Initial D. While emotional scenes with Gong Li drew some laughter from the audience, his final scene was noteworthy and articulation has improved.

Kudos goes to Chow Yun Fatt and Gong Li. Chow has improved on his accent tremendously (which was very strange in Crouching Tiger) and portrayed the Emperor with magnitude and hysterical outrage. Look out for the scene as the usually mild mannered Chow punishes his son with both rising temper and hair.

While the film obviously banks on Gong Li’s bosoms, they shouldn’t distract audience from her exceptional acting. It may be over-the-top at times, but she shows that nobody else can play this vengeful and solitary empress better than her. At this moment, she is the queen of the Chinese cinema.

The story of betrayal, illicit affairs, chilled relations and dysfunctional families may be run on the mill and overdone. Drawing parallels with The Banquet by Zhang Ziyi is inevitable. Both are about an obsessed empress who craves for a relationship with the prince (Interestingly, both well-known for playing gay roles) and demands for more power from the emperor.

Curse of the Golden Flower is not just soap drama but a period epic to impress with colours, opulence and sheer indulgence.

Storyline:User Reviews: It is a true fact that documentaries about famous people related to cinema such as actors,actresses and directors are mostly boring affairs as there are moments in them when they try to glorify...

Storyline:A hapless grifter stands to inherit a small fortune from his estranged grandmother if he travels to Harmony, Texas to live with her. Instead of a short road to easy money, he finds a soft spot in his heart f...