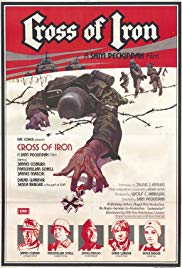 Storyline:
In 1943, in the Russian front, the decorated leader Rolf Steiner is promoted to Sergeant after another successful mission. Meanwhile the upper-class and arrogant Prussian Captain Hauptmann Stransky is assigned as the new commander of his squad. After a bloody battle of Steiner’s squad against the Russian troops led by the brave Lieutenant Meyer, who dies in the combat, the coward Stransky claims that he led his squad against the Russian and requests to be awarded with the Iron Cross to satisfy his personal ambition together with that of his aristocratic family. Stransky gives the names of Steiner and of the homosexual Lieutenant Triebig as witnesses of his accomplishment, but Steiner, who has problems with the chain of command in the army and with the arrogance of Stransky, refuses to participate in the fraud. When Colonel Brandt gives the order to leave the position in the front, Stransky does not retransmit the order to Steiner’s squad, and they are left alone surrounded by the …
Written by
Claudio Carvalho, Rio de Janeiro, Brazil
User Reviews: This is one of those movies that I needed to watch a second time and do a little research on. Once again, "Bloody" Sam didn’t let me down. This is definitely a different war film from its time and now. Peckinpah’s directed this in a great fashion that hasn’t been seen I have not seen his films since "The Wild Bunch". I was lucky enough to have found the 133 minute version in a rental store. I hope one day to see this version on DVD in widescreen. James Coburn is once again in a great role as Steiner. He is also supported by the great James Mason, Maximillian Schell in his best role since "Judgment at Nuremberg", and David Warner. The film had some fine editing and slow motion shots, good underscore, and a solid script. It is a tragedy that Peckinpah went so over budget that they had to end the movie half way through the script. I hope one day that somebody will remake this in the eyes of Peckinpah, and be able to film the entire film.

Storyline:Bertrand Morane's burial is attended by all the women the forty-year-old engineer loved. We then flash back to Bertrand's life and love affairs, told by himself while writing an autobiographical novel. A fil...