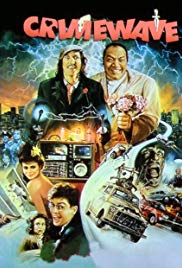 Storyline:
A pair of whacked-out cartoon-like exterminator/hitmen kill the owner of a burglar-alarm company, and stalk the partner who hired them, his wife, and a nerd framed for the murder, who tells the story in flashback from the electric chair.
User Reviews: Sam Raimi? The Coen Brothers? A COMEDY??

Even a movie as ragged and dog-eared as "Crimewave" can blindside you with all of its talent, effort and loving detail to the life and loves of criminals, love-struck young men and Louise Lasser.

The look of this movie is definitely one-of-a-kind. You’ve never seen another one with the kind of color scheme, cinematography and Fellini-esque attitude as this one has.

And what a cast! Not only is Lasser involved but also such dependables as Brion James, Paul L. Smith, Bruce Campbell and Frances McDormand (in a bit part as a nun).

The blinding rate of gags, both visual and verbal, is too high to count. I, myself, have several favorite quotes from this movie:

(quote 2) POLICEMAN – "What kind of sicko would kill a man and put lather on his face?"

The list goes on and on, but why spoil it for you? "Crimewave" is such a rich, enjoyable effort that it would be a crime if you missed out on it. Beg, borrow, cheat, steal, lie and bite and claw if you must, but do whatever it takes to see "Crimewave"!

10 stars and a million mega-"hurts" for this low-budget gem that proves once and for all that nuns can talk when they have to.