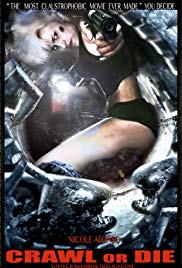 Storyline:
An elite security team assigned the task of protecting the last known woman who can become pregnant, find themselves caught in an endless claustrophobic underground tunnel system. The team soon learns – the real horror is not the unstoppable force chasing them, but the ever shrinking tunnel itself.
User Reviews: 7/10 to get the ratings up a few points. Otherwise I would give it a high 6 to pass the threshold of "should see" / "worth watching."

You have to judge it for what it is and the constraints.

The plot is entirely incidental to the flow.

It’s not reasonable to compare those movies to Crawl because of the constraints. hold Crawl to that level of quality.

Don’t fast forward it because the value of the movie is in the extreme intensity and claustrophobia.

My anxiety level built up to the point at the 2/3 mark I had to take a break and a sedative. If I’m going to have a heart attack, I want it to be for something really enjoyable that involved several companions and wreck my marriage! Just kidding!

I’m thinking the whole time how incredibly fit the protagonist is and boy do I need get off the couch. What a motivator.

A couple of improvements – personally – I would have made: no special audio effects. Sound, yes but not effects. Sometimes, less is more. That’s worth a point in itself.

There’s some obvious/blatant copy/paste from other movies. But they are not important. Just let it go.

Lastly, I watched it at 2 in the morning by myself. Perfect recipe.

Enjoy the show. Disregard the very high and the very low reviews and you’ll get a more accurate/objective recommendation.