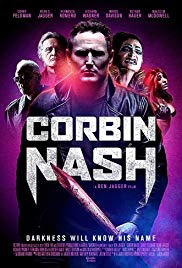 Storyline:
Set in a bloodthirsty Los Angeles, one rogue detective’s (Dean S. Jagger) obsessive search for the truth behind his parents’ murders leads him to confront a monstrous duo of Queeny (Corey Feldman) and Vince (Richard Wagner) who drag him into a Hellish nightmare he was never prepared for. Lost to an underworld of horrors dating back to the dawn of time, he soon discovers that he is actually the last surviving member of the Nash family, a historic clan of demon hunters. As he is forced to acknowledge a foreboding destiny, he is attacked and brutally left for dead, only to be recovered by Macy (Fernanda Romero), a pure soul who is led by the mysterious Blind Prophet (Malcolm McDowell). At last, Detective Nash is reborn the ultimate killer. Seeking vengeance he wages a violent war on the Beasts that roam the darkness of this world, finally embracing his true legacy – CORBIN NASH, Demon Hunter. Rutger Hauer and Bruce Davison co-star.
Written by
Jagger Wagner Productions
User Reviews: I like films that try and do things differently and this tried hard and almost made it.

Loved the music and contrary to other reviews I thought Corey Feldman made the movie from his intro Silence Of The Lambs ripoff to his Brides Of Dracula castle’esque mansion setting he made the movie for me!

The movie has some bizarre filming techniques and the action is pretty brutal and bloody with plenty to satisfy the gorehounds but it was just the Blade series in combo with Dracula, Demons, The Devil , Trannies bizarreness of it all that made this one stand out for me. Apart from the fact I have a soft spot for poor old Rutger Hauer who never went anywhere after his magnificent performances on Bladerunner and the Hitcher and of course The one and only Malcolm McDowell! What is not to love about that combo!

The last time I saw a movie really push the vampire genre was 30 Days Of Night and whilst this will never match that masterpiece it is anice little venture into different vampiric terror-tory for me!

So no I am not one of the 1/10 (which means its the worst film you have ever seen) brigade – we have movies like The Bad Batch for that, give this one a try you might just find it interesting.

Storyline:Towa Furuya is a handsome high school student. Since he was little, he has always been surrounded by women. He believes that he is popular with women, but he has never had a girlfriend in his life. One day, ...

Storyline:Two women abduct an alt-right online troll in an act of vengeance but it doesn't go to plan.User Reviews: