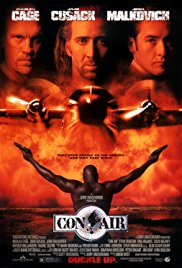 Storyline:
Cameron Poe, a highly decorated United States Army Ranger, came home to Alabama to his wife, Tricia, only to run into a few drunken regulars where Tricia works. Cameron unknowingly kills one of the drunks and is sent to a federal penitentiary for involuntary manslaughter for seven years. Cameron becomes eligible for parole and can now go home to his wife and daughter. Unfortunately, Cameron has to share a prison airplane with some of the country’s most dangerous criminals, who took control of the plane and are now planning to escape the country. Cameron has to find a way to stop them while playing along. Meanwhile, United States Marshal Vincent Larkin is trying to help Cameron get free and stop the criminals, including Cyrus “The Virus” Grissom.
Written by
John Wiggins
User Reviews: While not as clever or amusing as _The Rock_, which this was apparently an effort to surpass, it certainly delivers the pyrotechnics. Cage, as always, delivers the best performance he can, given the confines of the script, and his best _Raising Arizona_ drawl.

The film’s beginning sets a hopeful tone, we see the honorable Cage unjustly imprisoned and preparing to return to his home and the child he has never seen. Meanwhile, the penal system is filling the transport plane which will take Cage to freedom with a cast of the worst criminal psychos behind bars. There is an odd parallel to the beginning of _Stagecoach_ as the plane is loaded with the case of miscreants and a cursory description is given of each criminal. The film has a weakness for hyperbole, each character introduction, each scene, each explosion is meant to top the one before it.

Fortunately, the film does have a real ensemble cast, the full roster of villainous character actors: Malkovich, Rhames, Buscemi, Danny Trejo amongst the cons. The law is Cusack and Colm Meaney and Rachel Ticotin (Total Recall). Even Dave Chapelle is amongst the crooks.

Ultimately, the film maintains too straight a face during the ruckus. If you are going to ask the audience to accept one outrageous improbability after another, you need to keep it amusing. Chappelle keeps it funny while he’s on screen but it’s not long enough.

Unfortunately, the throttle has only one speed: pedal to the metal. Unlike Woo or McTiernan, who–predictable as they may arguably be–are able to build crescendos and know when to let off the gas, this one keeps on pushing harder and harder until we’re feeling a bit catatonic. There is just a terrific amount of pyrotechnics and they use up twice as much powder each time. It never seems to end, which is usually a bad thing for an action movie.

But I shouldn’t grouse too much. It is definitely an entertaining diversion, and Cage and Cusack are good in their roles, Colm Meaney is as always amusing. Malkovich and Buscemi are creepy enough but not the flamboyant psychos they could have been. Ironically, Cage has exactly that type of charisma (remember _Kiss of Death_, _Snake Eyes_, _Face Off_) but is forced to be restrain himself as the stolid ex-Army ranger.

Finally: what the HECK does bruckheimer have against Corvettes???

Storyline:Karen, an emergency room doctor, is rescued by a handsome stranger named Daniel after she is attacked on her way home one night. When Daniel is injured in the attack, Karen takes him back to her house to ten...